Nafessa Williams made network television history on Tuesday in The CW’s Black Lightning.

Williams, who plays Anissa Pierce, aka Thunder, is network television’s first Black-lesbian superhero. Thunder is unapologetically Black and ready to fight for what’s right as she steps into her powers.

ESSENCE spoke to Williams, a Philly-native, who says she has the city to thank for her work ethic and discussed the history-making role and why her biggest purpose is to make sure that little Black girls see themselves represented.

ESSENCE: The poster for your character, Thunder, recently dropped and the reactions have been incredible. Have you seen them?

NW: I heard! Kudos to the costume designer, LJ, Laura Jean. She’s so dope. I remember her showing me the visuals over the summer, it’s been a process to make this costume. I went through a number of fittings and we are always continuously doing fittings because we’re always fine-tuning it. You want to make sure it’s comfortable, especially with the fighting. I cried when I first put the costume on. It was such a moment for me because here I am chosen to be this first Black-lesbian superhero on network TV and it’s such a moment, it’s a historic moment. It is so emotional for me and I’m just really happy that people are taking to the costume and they’re happy with how it looks. I just love that it’s not super sexy. That it’s strong and she looks bold and fierce in it at the same time with a feminine touch on it.

ESSENCE: Let’s talk about the importance of your character because, like you said, Thunder is the first Black-lesbian superhero on network TV, I want to hear from you, the importance of that and also how it factored into your decision in taking this role.

NW: It was exciting for me because I always want to challenge myself to take on roles that are new and a role that I’ve never done before. I’ve never played a lesbian on camera before. So that was cool for me. To be able to show some range and to tap into that. Also, I think it’s really, really important for young, not just black, but young lesbian women to see themselves on TV and to see how bold Anissa is walking in her truth, in that she’s okay with who she is. She’s accepted it. She doesn’t really care. She’s living her life unapologetically.

I think it can be difficult for young lesbian or young gay, bisexual, transgender to come out and be open with who they are because there’s such a huge stigma attached to that preference of their sexuality. And I just love that Anissa is boldly walking in who she is and I hope that young lesbian women are inspired when they see her. Also, my family is really accepting of it on the show, so I think it’s important for families and parents to see, okay cool, wow they’re accepting their daughter on this show. Maybe we could be a bit more open and have a better communication about this, and accept our child, and love them regardless of what their sexual preference is. So I’m just really, really honored to lend myself over to this character for that being one of the main reasons. 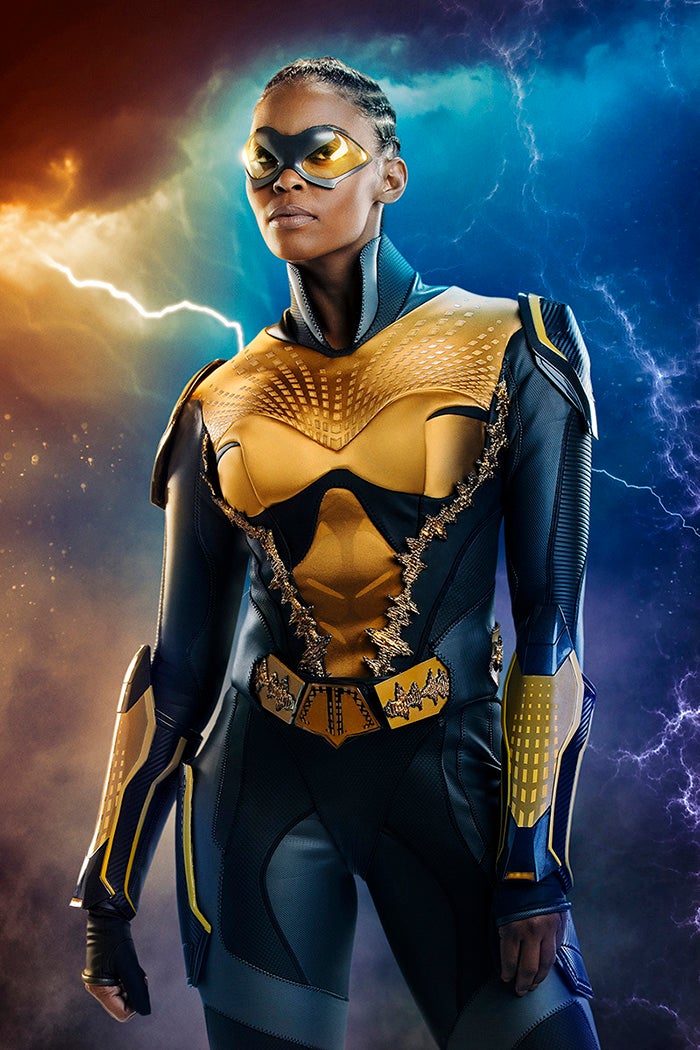 ESSENCE: Yes! And, there are —SPOILER ALERT—moments of intimacy between Anissa and her partner, another woman of color, something rarely seen on network TV.

NW: Yeah! And more importantly, too, as a black little girl, I didn’t have a superhero to look up to who looked like me, who had cornrows like I did, who was from the city. So I’m just really, really excited for the little girls sitting at home on the porch, seeing, with cornrows, and seeing themselves on TV, and embracing their natural hair, and embracing how we look in a day, at a day we are right now where everyone is changing how they look and we’re doing all this surgery and everyone’s following this trend. And I think that the show is being authentic as to who we are as a culture and to embrace who we are.

If anything else, I want little brown girls to walk away embracing who they are and how they look, knowing that they are beautiful and they don’t have to change anything.

ESSENCE: Yes, those little girls will see you and an entire family of Black superheroes.

NW: And what’s also cool about it is that we typically see the mother being the head of the house or the single, and she’s raising the children by herself. In here, we get that image of a Black man doing that and we need that image because there are Black men out there who are stepping up to the plate and who are single fathers. And, if there aren’t, hopefully, this show is there to encourage other Black men, like okay, let me do this. It’s a moment.

ESSENCE: And, let’s just quickly mention Philly because that city has produced some amazing talent, you being one, and people like Questlove and Kevin Hart and viral superstars like Quinta Brunson. What is it about Philly that is creating these talented, creative people? What role has the city played in shaping the artist that you are?

NW: You know what? I tell everybody all the time it’s the Philly in me. Philly taught me. I get my swag from Philly. I get my hustle from Philly. I get my work ethic from Philly. It’s just the way we were raised. It’s a tough city, tough environment, so we had to learn how to maneuver in a different way. We had to come up with creative ways of surviving and protecting ourselves. I grew up in the inner city. It wasn’t a joke.

I believe that Philly has helped me to be where I am today. If I wasn’t from Philly, I couldn’t promise you that I would have the same drive and the same ambition because as a little kid, I always saw myself as making it out and I would escape with television. And I’d look at the Huxtable’s and I’d be like, “Oh my God. I look like her.” I want to do this. I can be her. And I would fantasize through their lives because they seem to be what I was hoping for. I believe that it’s my greater purpose, even greater than being on TV. I believe I’m here to inspire and to encourage people to follow their dreams, especially the ones in the inner city, to just let them know we can, we already made it. It’s done.

Black Lightning airs Tuesdays on the CW at 9 p.m. ET.