At a time when the U.S. is grappling with thorny issues involving racial, religious and political identity, a standing room only crowd gathered for a symposium in the nation’s capital about stereotypes and the pervasive role they play in American culture.

The free, public program, held on Thursday evening in the Rasmuson Theater of the National Museum of the American Indian, was underwritten by Accenture, a Fortune Global 500 company. The event drew a diverse audience of academics, students, artists, corporate and other community members for a series of presentations and a panel discussion, followed by an audience Q & A.

Tiya Miles, a University of Michigan professor of Afro-American and American Studies, moderated the forum, which featured four different scholars deconstructing the concept ‘What is a stereotype?’ The formal definition—which speaks to generalized presumptions about a particular group—often does collateral damage by generating fear, playing on anxieties, and damaging the self-worth of those being judged, according to panelists.

“People have trouble refuting stereotypes,” said Imani Perry, a professor in the Center for African American Studies at Princeton University. “Racial narratives are persistent; they are partners to stereotypes.”

She cited, for example, terms that are often associated with African-Americans, i.e. “thug” “criminal” or “fatherlessness”—broad brushes for humans that fail to take into account individual behaviors. Such stereotypes have contributed to “a profoundly unequal and unjust social order,” she said. “We have to challenge it.”

That sentiment was echoed by fellow presenters who represented a range of multiracial/ethnic and multigenerational viewpoints.

To wit, Adrienne Keene, a member of the Cherokee Nation and an assistant professor of American Studies at Brown University, is a millennial. She discussed issues ranging from the Dakota Pipeline protests to cultural misappropriation such as Halloween costumes or outfits featuring, say, Pocahontas: “Modern designers are benefitting from the distortion of traditional Native cultures and designs.”

Gaurav Desai, a professor of English and comparative literature at the University of Michigan, talked about stereotypes in African literature. He countered myths that the continent is rife with impoverished or barely clothed natives, noting the reality of a far more educated “Afropolitan” population “that’s not heterogeneous.”

Closing out the discussion was Jesse Wente, a Canadian film critic and producer, who challenged “distorted” depictions of Native American nations and culture in cinema, i.e. the popular Hollywood Western or drama. He contrasted on-screen portrayals of indigenous peoples with the reality of policy in both the U.S. and Canada that “continues to inflict harm.”

Indeed, forum participants stressed that stereotypes have long had an impact on America’s collective psyche. The program notes said as early countrymen and women sought to broadly define themselves, race became a major fixation.

The result? Stereotypes like ‘Tarzan and Jane,’ ‘Uncle Ben and Aunt Jemima’ and ‘Tonto and the Lone Ranger,’— well-known images that have persisted for decades and, in some cases, centuries.

Today, a new wave of stereotypes surrounding immigrants, among others, has emerged. The recent White House travel ban, critics contend, is an example of how Islamophobia and stereotypes can influence public perception and policy.

“We are in incredibly uncertain and troubling times,” said Dr. Johnnetta B. Cole, director of the National Museum of African Art, and president emerita of Spelman and Bennett colleges.

During the event, she was gifted with a stunning blanket from Kevin Gover, director of the National Museum of the American Indian, to mark her impending retirement. Accenture also announced a $25,000 college scholarship in her name to benefit students studying the arts. 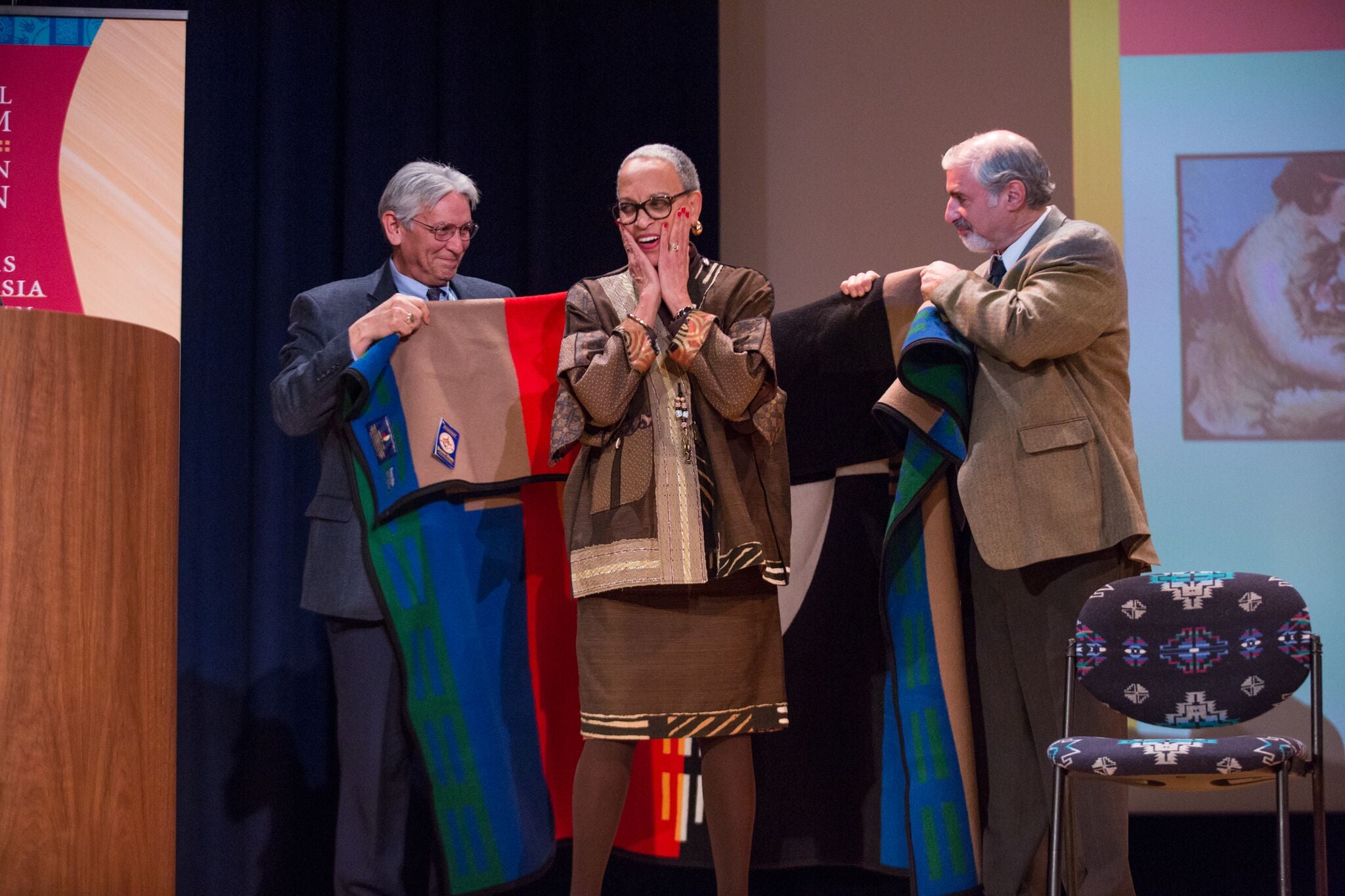 While angry about the direction some of the current national discourse has taken, Cole said she would continue to push for “a world where diversity is acknowledged, celebrated, because it is the way it should be.”

Accenture executive Marty Rodgers agreed. He was heartened by the robust turnout and stimulating dialogue.

“We pride ourselves on our diversity,” said Rodgers, the managing director of the company’s Washington, D.C. metro office. “Inclusion and diversity are fundamental to our company culture and core business values, and we are proud to support the Smithsonian’s symposium and efforts in moving this conversation forward.”