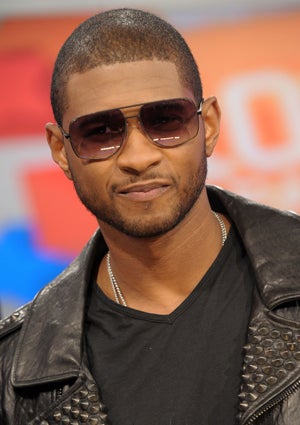 Who wins: Usher or Urrrsher? We all know Usher Raymond is a megastar, but he’s also proven to be quite human.  More human, perhaps, than we often like to admit about our celebrities. And just like everyday people, when they fall, celebs are sometimes able to get back up. With his latest album out today, “Raymond vs. Raymond,” Usher has risen triumphantly. Trials and tribulations, both public and private, have been a part of the crooner’s life since his maturation into manhood. No longer a teenager concerned only with nailing dance moves, Usher’s issues now stem from dealing with the women in his life.  From his oh-so-cute relationship with TLC member Rozonda “Chilli” Thomas, to his brief stint with supermodel Naomi Campbell, to his recent divorce from his stylist-turned-baby mother, Tameka Foster-Raymond. “Raymond v. Raymond” addresses the lessons he’s learned, and yet to learn, about the joys, challenges, and fulfillment of dealing with us womenfolk. We know Usher can sing, but with this project he aimed to prove once again he could use his voice to reach a certain depth. Usher wowed us in ’04 with “Confessions,” selling more than 10 million units in the U.S. alone. Four years later, in ’08, he delivered the forgettable “Here I Stand.” With this follow-up, Usher comes back hard: 15 tracks, approximately an hour long. It’s safe to say Usher felt he had a lot of making up to do to his fans. One might assume “Raymond v. Raymond” is conceptually addressing Usher’s struggle with his own duality, personal vs. private, or who he was vs. who he’s become. That isn’t necessarily the case. The real struggle here is Usher attempting to convince his fans to see him how they did before the “wedding album.” He’s aware that people respect the polished, responsible Usher. But, he’s also aware how they swoon over the “Throwback” sangin’ Urrrsher. So, what does he do? He delivers an album showcasing a confident and content bachelor that tells his truth. This truth for Usher is admitting that marriage isn’t exactly his forte. That he missed his fans and his old lifestyle. In an attempt to return to these times, he sings about what he knows best–the drama and sexual escapades the single life brings. The eerie, futuristic lead track, “Monstar,” is Usher’s re-introduction–letting the ladies know he’s back and ready to celebrate life. This continues with the album’s second single, “Hey Daddy (Daddy’s Home),” produced by Rico Love, which plays more like a declaration than a sexual come-on. Like the first single, “Papers,” Usher puts his problematic marriage on blast with “Guilty.” With the help of T.I., Usher addresses the struggle maintaining respect for a relationship where there is no trust, sarcastically yet subtly stating, “Trying to treat me like a crook/putting money on my books… Tired of your little games/fuck it, I’ll take the blame.” After quickly getting the drama off his chest, Usher gets down to the real meat of the album, where the most sensually charged tunes are successfully sampled. One of the album’s best cuts, “Making Love (Into the Night),” ingeniously samples Benny Mardones’ 1989 “Into the Night.” Using a sample of Al B. Sure’s 1988 “Night and Day,” Usher scores brownie points for his falsetto on “There Goes My Baby,” which finds him showing appreciation for his woman. Love and sex go hand-in-hand when “Raymond v. Raymond” addresses the universal battle on “Mars vs. Venus.” Usher metaphorically uses the astronomical references singing about a battle in and out of the bedroom. On the bass-laden “Pro Lover” Usher goes from astronomy to anatomy, boasting that when it comes to making love he isn’t a player, he’s a pro. Overall, Raymond v. Raymond is definitely a winner, but it’s not perfect. Sounding like an auto-tuned long lost member of the Black Eyed Peas on the Will.I.Am produced “OMG,” Usher seems to be chasing trends rather than leaving his own stylistic fingerprint.  Intended to be dance circuit ready like his hit “Yeah,” the pop-ish “More” is more appropriate for the pre-game two step in the living room than coming out of the club speakers. On “So Many Girls,” a rock-tinged tune full of jaunty guitars and synthesizers, Usher beats a dead horse describing all the racial and ethnic groups that want a piece of him. OK, we get it, Ush! While new fans may be lucky to have missed “Here I Stand,” older fans will be ecstatic that the Usher they remember is back, leaving his unmistakable musical signature on his new body of work. This time out, “Raymond vs Raymond” is pretty much a win-win situation. Read more: