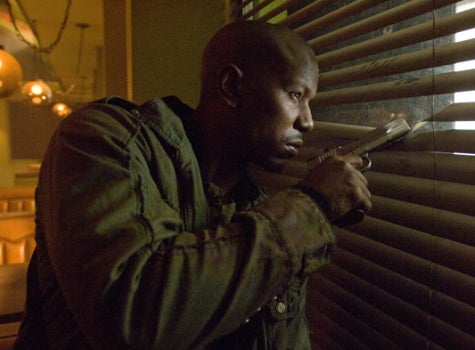 It seems that Tyrese Gibson has truly found his footing on the big screen. The Grammy-winning singer, actor and star of “2 Fast 2 Furious,” “Baby Boy” and the “Transformers” franchise is set to embark on yet another blockbuster, “Legion,” opening today. Without giving too much away, we can say that the supernatural thriller revolves around the patrons of an in-the-middle-of-nowhere diner whom are unwittingly recruited to join the battle to save mankind. Tyrese’s character, Kyle Williams, finds himself in the midst of the melee at a time when he’s consumed with his own problems, mainly fighting for child custody. Tyrese understood. “I could relate to his relationship issues, especially those that have to do with a child,” says the actor, who recently divorced and currently shares custody of his daughter with his ex. Ironically, Kyle is on his way to family court when he stops by the diner for help. “He needs directions and [ends up] getting sucked into the matrix.” Along with his budding film resume, Tyrese has also delved into the world of publishing with the digital, comic book series, “Mayhem,” which made sales history on iTunes. So, what’s he got up his sleeve next? He’s keeping mum, for now. “I’m not limited to doing films with robots or South Central LA-type [themes],” he begins. “For my next role, I’m letting my hair grow out and I’m putting on weight, but I can’t tell you about [the project]. I’m going to shock the world.”