Try and listen to Stephanie Mills’ timeless rendition of “Home” without getting goose bumps. We dare you.

This is the song that all fans think about when they think of The Wiz, the soulful reinterpretation of L. Frank Baum’s The Wonderful Wizard of Oz and the 1939 film classic it inspired.

In time for tonight’s bold and brave The Wiz Live, here are seven fun facts about the Broadway production, which debuted in 1975, the subsequent 1978 movie and NBC’s updated TV incarnation.

1. In the Broadway production, a teenage Mills played Dorothy but was replaced by Motown great Diana Ross in the film, who was 33 at the time. Motown and Universal produced the flick. Mills will play Auntie Em in The Wiz Live. Here she is singing “Home”:

2. The original staging of The Wiz suffered low turnouts before and after arriving on Broadway. That is until the producers created a TV ad campaign featuring the song “Ease On Down the Road,” which attracted huge audiences. At the time, Broadway shows didn’t advertise on television.

3. Late Tony award-winning actor Ted Ross (The Jeffersons and Benson), who was a baritone, played the Lion in the Broadway version and the movie adaptation. Tony-nominated actor David Alan Grier will play the role on TV.

4. Comedian Richard Pryor played the Wiz in the movie and Oscar and Emmy-nominated actress Queen Latifah will do the honors in The Wiz Live. 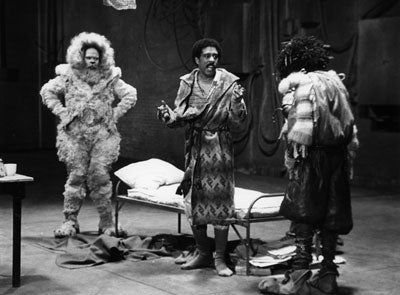 5. Tony-winning actress Phylicia Ayers-Allen, who later became Phylicia Rashad and is best known as Claire Huxtable from The Cosby Show, costarred as a Munchkin in the original Broadway production. Meanwhile, jazz star Dee Dee Bridgewater costarred as Glinda. Lena Horne played Glinda in the big-screen version and Uzo Aduba (Orange is the New Black) will do so on the small screen.

6. The late great King of Pop Michael Jackson made his acting debut as Scarecrow in the film. Elijah Kelley (Red Tails) will play the role on TV.

7. Mabel King of What’s Happening!! fame costarred as Evillene in both the Broadway and film versions. Grammy-winning star Mary J. Blige’s costume is a lot more modern and flattering.

Will you be tuning to The Wiz Live tonight at 8 p.m. ET on NBC?