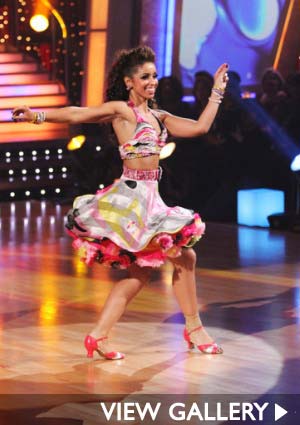 Update 11/25/09: Mya fans were shocked and disappointed last night when the singer, dancer and ‘Dancing With The Stars’ contestant lost the competition. Although Mya and Dmitry Chaplin led the pack throughout the show, the pair came in second behind Donny Osmond and Kym Johnson in the finale. The votes were divided up 50/50 with judges and fans weighing in for the final score. On Monday night, Mya won with 30 points but she came in two points behind Osmond on Tuesday.
_______________________________________________________
Maya on Dancing With the Stars’: The Final Countdown

Grammy Award winning, multi-platinum artist Mya has her eyes on the number one spot as she enters week ten of “Dancing with the Stars” tonight (ABC). Here, she breaks down her dancing background and gets real about her next steps.

ESSENCE.com: So there’s been talk of you being a trained dancer, can you clear up those misconceptions?
MYA: Actually, I’m not a trained dancer. I studied music videos and then would repeat the dances on my kitchen floor (laughs). My mom taught me from a library book, then I took some classes. I also did some hip hop dancing in my videos and learned those moves from choreographer to choreographer but I have no formal training. What I do on DWTS is different from anything I’ve done before; I’ve never danced with a guy partner whose lifting me up in the air doing all these crazy things (laughs).

ESSENCE.com: There are some folks on the blogosphere, who feel you have an advantage. Is there anything you’d like to let them know?
MYA: I consider myself a natural dancer. Anything you put before me that doesn’t require too much strength and flexibility I believe I can do as long it’s taught very, very slowly. It’s where I’m a musician that my advantage comes in because I have timing and rhythm, not because I have prior dance experience. Sometimes, that gets in the way because you’re more set in your way.

ESSENCE.com: Do you have any special moves or tricks for tonight’s show?
MYA: I don’ have anything special planned. It’s going to be tough week because we have four dances for the first time. I’m just trying to learn our routine and perfect them.  It’s really hard.

ESSENCE.com:  How often do you practice?
MYA: Every single day. For this next show, we had a 14-hour rehearsal

ESSENCE.com: What’s next for you?
MYA: Thanksgiving (laughs).  I’m really looking forward to spending time with my family. DWTS has been an incredible rewarding experience so I have a lot to be thankful  for. Plus, I’m taking three days off to recover.

We’ll be watching…and don’t forget Whitney Houston and Queen Latifah will be there to perform.

‘The Dancing with the Stars’ Performance Show airs Monday, November 23rd at 8/7c on ABC.