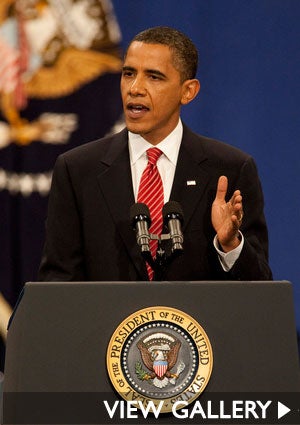 President Obama announced his plan for military action in Afghanistan last night at the West Point Military Academy–a major speech that has had both detractors and supporters buzzing weeks before he even said a word. Since we already knew he would be calling for 30,000 more troops in order to stabilize conditions before withdrawal, tonight was really a moment for him to define what the goal is exactly in Afghanistan and how to bring the way to an end.

The President opened by explaining the reason for sending troops to Afghanistan in the first place: the September 11 attacks. Carried out by the extremist group al Qaeda, whose base was in Afghanistan–where another radical group, the Taliban, harbored them–the devastating attacks led to U.S. troops being deployed to the country. “Within a matter of months, al Qaeda was scattered and many of its operatives were killed,” said President Obama. “The Taliban was driven from power and pushed back on its heels.”

But the subsequent war in Iraq in 2003, to which the President was opposed, drew most of our troops and resources. Meanwhile, he says the situation in Afghanistan has deteriorated, with the Taliban and al Qaeda finding a safe-haven in neighboring Pakistan and taking control over parts of both countries. So, the plan is to remove troops from Iraq by the end of 2011–and send an additional 30,000 to Afghanistan and Pakistan in the first part of 2010. After 18 months, they are to begin coming home.

“I make this decision because I am convinced that our security is at stake in Afghanistan and Pakistan,” Obama said. “This danger will only grow if the region slides backwards, and al Qaeda can operate with impunity. We must keep the pressure on al Qaeda, and to do that, we must increase the stability and capacity of our partners in the region.”

The President clarified that his goals are to defeat al Qaeda, undo the Taliban’s momentum, and strengthen the Afghani security forces and government so that the United States can transfer responsibility of the country over to them. He also stressed the need for diplomacy, and renewing global alliances to end the cycle of conflict.

Less defined was how to pay for escalating the troops in Afghanistan, which he said would likely cost $30 billion for the military this year, and offered only that he will work with Congress to address it. Also dubious is whether the President’s speech convinced more people to support the war, with polls showing that, after eight years and not much to show for it, most Americans want the troops out now.

What do you think of President Obama’s strategy in Afghanistan?