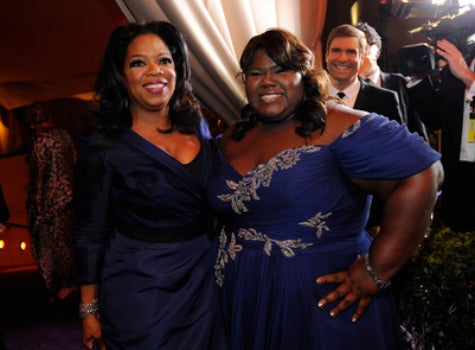 “She was a student trying to earn money to go to college. On Monday, she skipped school to audition for a movie called ‘Precious.’ On Tuesday, they called her back to meet the director, Lee Daniels. On Wednesday, she got the part and tonight, she is sitting at the Academy Awards in the same category as Meryl Streep. I tell you, if that isn’t a Hollywood fairytale, what is?  “The authenticity, Gabby, with which you played the hard, brutal moments in our movie, ‘Precious,’ where did that come from? The transformation from your own joyous, positive, radiant, fun self to the heartbreaking despair of that girl, Precious–where did you learn how to do that? When we look at you, we see a true, American Cinderella on the threshold of a brilliant new career and ‘precious’ is but the first of many adjectives coming your way…and they are all great.”  Those were the words spoken by Oprah Winfrey on behalf of a teary-eyed Gabourey Sidibe during the Academy Awards on Sunday. Though Sandra Bullock was handed the Best Actress Award, there’s no denying that Sidibe has made an indelible mark on the entertainment industry. And as evidenced from her recent, red carpet swagger, she’s feeling more at home in Hollywood than she’d ever imagined. Whether it’s her upbeat demeanor, bold confidence or how she’s managed to create her own mold for the standard, Hollywood ingenue, it seems that the planets were somehow aligned for her to take center stage in this moment, at this time. For those reasons, it was our honor to salute her at our Third Annual Black Women in Hollywood Luncheon last week, where director Lee Daniels bestowed her with love and our guests welcomed her with a warm reception. Sidibe will forever be linked to “Precious,” but we also look forward to witnessing how she’ll evolve as an artist. For starters, she’s set to star in the Showtime drama, “The Big C,” airing this spring. It seems that she is truly on her way. We’ve got our eyes on you, Gabby. Represent.   Read more: