This is Teyana Taylor. She’s a singer, songwriter and all around badass. She just had a baby 8 months ago. And yet there she is looking ah-mazing in Kanye West’s “Fade” video. Did you hear us say she has a newborn?

After word go out that MTV had given Kanye West four minutes to do whatever he wants at the VMAs, we all held our collective breaths in that “oh lord what is Kanye gonna say” kinda way. But after his usual spiel about “[Steve] Jobs, [Walt] Disney, [Howard] Hughes” Kanye blessed us with the wakeup call that is Teyana Taylor in the “Fade” video, which is currently streaming exclusively on TIDAL.

Teyana Taylor’s Baby Daughter Has Her Own Head Wrap Line

To say Teyana has us all rethinking that gym membership we never use is an understatement. The 25-year-old singer’s buff body and moves totally reminded us of Flashdance meets Janet Jackson’s “Pleasure Principle.” And then her fiance Iman Shumpert joins her for a steamy shower scenes that will leave you hot and bothered. Lord. Ok, ok, and then you won’t be able to contain yourselves as Teyana and Iman’s daughter, Iman “Junie” Shumpert Jr. also makes an appearance. 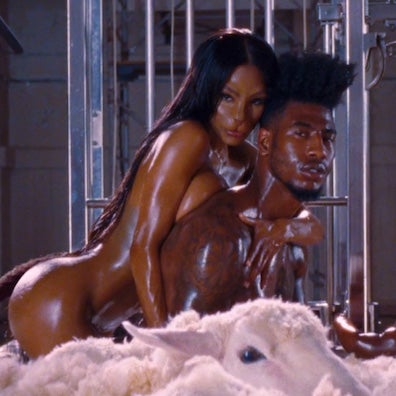 Watch the all the steaminess below.

This Black Female Entrepreneur Opened One Of Brooklyn’s Ho...

It’s Back To School Time Again— These Are Some Expert Ti...