By Britni Danielle · Updated December 6, 2020
For the past several years, Hollywood has been locked in a public debate about diversity. Though creatives of color have been pressing for the film biz to become more inclusive since the very beginning, when April Reign created #OscarsSoWhite in 2015 the industry was once again put on notice for its lack of opportunities for those in underrepresented communities. While some strides have been made in recent years, Black actors — and particularly Black female actors — are still paid less than their counterparts. But in a recent interview about the Time’s Up movement, ESSENCE’s November cover star, Tessa Thompson, reminded white actors how they can use their privilege to help their colleagues of color. During a discussion with Captain Marvel star Brie Larson and University of Southern California professor and Annenberg Inclusion Initiative founder Stacy Smith, Thompson recalled one small way a fellow actor used her position to help the Creed star. “I feel really heartened by people taking action,” Thompson told The Hollywood Reporter. “It’s what [Reese Witherspoon] did at HBO in terms of pay parity. I simply got a call that said we’re renegotiating. I didn’t do that work. Someone did it on behalf of me. Because she was like, “I have a stake in this company and what we do.” Though Thompson didn’t go into further detail, her point is clear: white actors with privilege can easily use their power and access to help open doors for others. In the same conversation, Larson, talked about her mission to ensure all of the projects she works on includes a diverse cross section of people. 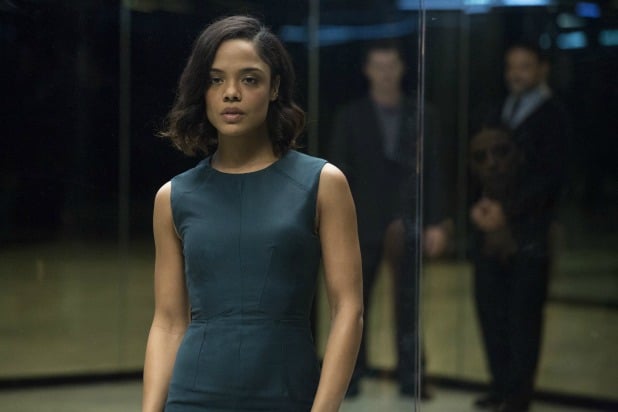 “On the Captain Marvel press tour, I’ll be pushing for representation across the board: my interviews, magazine covers, the clothes that I’m wearing,” she said. “It means spending more time thinking about things than you sometimes want to, but it’s worth it.” Larson isn’t just paying lip service to the idea of diversity, she’s committed to working on projects that include an “inclusion rider,” which NPR defines as “a stipulation that actors and actresses can ask (or demand) to have inserted into their contracts, which would require a certain level of diversity among a film’s cast and crew.” The actress’ first film with an inclusion rider is Just Mercy with Michael B. Jordan. The project, based on Bryan Stevenson’s moving book, was Larson’s first experience working with a crew made up of predominately people of color.

I’m committed to the Inclusion Rider. Who’s with me? https://t.co/yvQ0wR5D80

“The movie was made with more than 70 percent people of color, and it was the best experience I’ve ever had,” Larson said. “It was the first time in my career that I had hair, makeup and wardrobe crew that were all people of color. I’ve been in SAG since I was 7 years old. Twenty years I’ve been surrounded by white people. It saddens me to recognize that we’ve been segregated in this way within our industry.” Thompson, who’s worked with directors like Ava DuVernay who’ve made having diverse casts and crews part of her mission, said making Hollywood look like the real world won’t happen without a concerted effort. “Inclusion doesn’t happen by mistake,” Thompson said. “It’s also about creating pipelines where they don’t exist.”