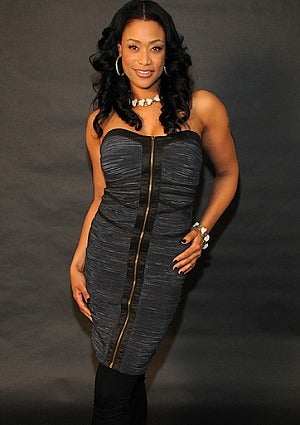 If you’ve watched previews of the second season of “Basketball Wives,” you’re already familiar with Tami Roman. The former wife of retired baller Kenny Anderson, steps into the “BW” scene to stir things up. On the show, Tami is very honest about repairing her almost non-existent relationship with Anderson — with whom she has two daughters — and her time of hardship post-divorce. When the “Real World” alum stopped by ESSENCE.com last week, she opened up about how she went from the life of luxury to being on food stamps, and how she feels about the other cast members. ESSENCE.com: How did you decide to be on “Basketball Wives?” TAMI ROMAN: Shaunie’s a friend of mine and when she did the first season they contacted me and I didn’t really feel it was the right time for me then. So I watched the first season and I just kind of felt that my particular situation wasn’t really represented in terms of living the life of luxury and people doing what they’re supposed to do with regard to their obligations to their children and all of that and I said you know I think it’s time for me to open up my life and tell the other side [laughs]. ESSENCE.com: Do you think your story was misrepresented? ROMAN: What happened was Kenny and I got divorced, we did have a prenup that basically said what I came with is what I leave with, but that did not have anything to do with his child support obligations, which he did honor in the beginning. I think that the importance of my being involved in ‘Basketball Wives’ is that I’m not blaming Kenny for the situation that I’m in. I’m showing the world that it was basically me. I fell victim to pride and trying to keep up a lifestyle that everyone else thought I should have. [I was] saying, ‘If we were still with Kenny, we’d have this type of house,’ and so over the course of that eventually funds depleted and, as everyone has found out, I had to turn to getting food stamps to help me feed my children. I kind of felt like I’ve worked really hard I’ve never been without a job and literally every check I get they take something out and now that I need some help, I’m going to go get it. I wasn’t going to let my pride stand in the way of me taking care of my daughters. ESSENCE.com: Where are you and Kenny Now? ROMAN: We’re able to talk, which was my main reason for coming on the show and asking him to be involved in the show. We haven’t been proper parents. Kenny and I played hardball with each other. It wasn’t that I wasn’t allowing him to see the kids but if [he] wanted to see them, [he] needed to do it this way. He was saying, ‘No. I want to see them, but I want to do it this way.’ Eventually it never happened. That wasn’t the vision that I had for my daughters. I look around and I see my daughters and they’re not happy and they want to be involved with their dad. Kenny and I both share a responsibility in not really acting like adults and not really being proper parents, so [we’re] trying to make the best possible situation for our daughters going forward. Before we couldn’t even sit in a room with each other, so this is huge. ESSENCE.com: And you’re super proud of your daughters… ROMAN: They are my biggest accomplishment. Just when I think I have really messed some things up my daughters are like, ‘Mom, it’s going to be okay.’ They’re so smart — honor roll students, fluent in French. I may have done some things wrong, but what was important I did right. ESSENCE.com: On the show you had a conflict with Jennifer, but you came to ESSENCE together. Tell us your side of the confrontation. ROMAN: Jennifer is a very sweet person and I never wanted to have a conflict or an altercation with her. I’m not trying to fight; I’m 40 years old. They made light of the situation with my daughters and falling on hardships and having to be on food stamps. I felt like, you don’t really know where your life is going and you don’t know what path God’s going to take you down so don’t try to belittle me or make light of a situation that I felt is sensitive to me. She seems to feel like, ‘It’s just a food stamp and I don’t know what a food stamp looks like.’ I’m trying to get her to understand no it’s not the food stamp that’s not what this is about it’s about the fact that you tried to belittle me and my situation. ESSENCE.com: What’s your relationship with the other ladies? ROMAN: I went into the situation not liking Royce very much because from watching the first season, Royce just signified every other woman that Kenny has cheated on me with. But by the end of it we became closer. I’m just there trying to offer some pearls of wisdom whether they choose to take them or not and she was very receptive to that. Of course I’m friends with Shaunie. Evelyn and I are like a bad husband and wife couple. We’re really like mirror images of each other at different points. When I look at her, I go, ‘That was me in ’96.’ What she needs to do is look at me and go, ‘This is where my mindset needs to be because if I’m not careful I could very well end up like that.’ And I don’t really care for Suzie. I thought she was a cool person and then I walked away and she threw the knife in my back. She can’t keep her mouth shut. We’ll leave it there…