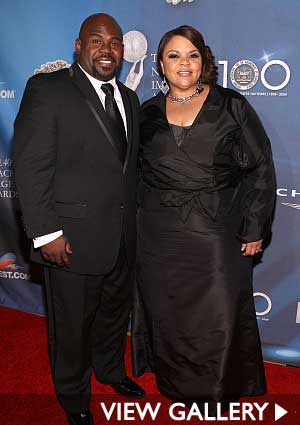 Few African-American actresses on prime-time television can say they enjoy the love and adoration that actress Tamela Mann has playing Cora Brown on the sitcom “Meet the Browns.” Fresh from singing her butt off at the New York Stock Exchange, Tamela paid the ESSENCE.com staff a friendly visit on December 11 with husband and co-star David Mann and son David Jr. in tow. David brought the house down with his infectious humor while Tamela dished on the recent passing of Tyler Perry’s mother Willie Maxine Perry, her new gospel album, and her faith.

ESSENCE.com: How is Tyler Perry doing?
Tamela: I believe he’s at peace. Of course he’s gonna miss his mother because they were really close and he’d done so much for her. A couple of weeks before she passed he told us he didn’t think she was going to make it to Christmas, so he knew and was preparing himself. We just pray for his strength. It’s been two years for me and I still speak to my mother when I walk by her picture. We just pray that God takes care of Tyler and his family.

ESSENCE.com: Your husband David is hilarious. What’s it like being married to such a funny man?
Tamela: It’s a bundle of joy being married to David, really. He’s funny like this all the time. We’ve been married 21 years and one wish that I have and want to share with couples is that I always pray that my love will stay burning for David Mann. I made that request to God and it’s something that I think we all need to ask for.

ESSENCE.com: On “Meet the Browns” you play father and daughter. That must be a trip.
Tamela: Working together is a lot of fun, but once he becomes Mr. Brown I don’t want him to touch me, I don’t want him to ask me for no sugar. He has a habit of patting me in the butt on-set and I’m like ‘No, you’re my father right now.’

ESSENCE.com: Does “Mr Brown” ever come home with you?
Tamela: [Laughs] I try to keep him pent up. People ask me ‘Why you don’t let David wear those clothes?’ and I’m like ‘He can’t walk around looking like Mr. Brown. Are you serious?’ Every once in a while Mr. Brown tries to peek out when we’re home though.

ESSENCE.com: You’re promoting your new album, “Tamela Mann: The Master Plan,” you have a record label and you’re still taping “Meet the Browns.” Sounds like you have a lot on your plate.
Tamela: Yes, and “Meet the Browns” just got picked up for 60 more episodes. I think it’s a blessing to be able to touch so many people’s lives so I don’t mind juggling it all. I know I can’t help everyone but I want to help as many people as I can through song and through laughter.

ESSENCE.com: Why did you call the album “The Master Plan”?
Tamela: At a time like now with the economy and so many downfalls I just feel like God has a master plan. Even if we don’t see all, don’t know all, we have to have hope. “The Master Plan” has so many uplifting songs like “The Joy of the World” and “I Trust in You” – just a lot of things that can be such a help right now in our world. It’s jazzy and bluesy but it still has a traditional gospel vibe. It’s really a gumbo of different flavors, something for the young and the old.