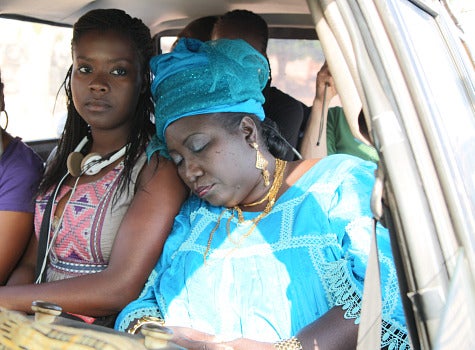 For filmmakers everywhere, there’s no buzz quite like Sundance Film Festival buzz. The festival, currently taking place in Park City, Utah is often an indicator of what films we’ll be talking about for the next year or so. If you remember, a little unknown film called “Precious” premiered at the festival last year to rave reviews. Need we say more? This year Focus Features is creating some buzz for African cinema by way of it’s ‘Africa First’ program in which three emerging filmmakers are selected to screen their short films at the prestigious festival. The year’s films are from three women filmmakers from South Africa, Senegal and Kenya. South African filmmaker, Jenna Bass’s short “The Tunnel” tells the story of a young girl’s quest during a massacre in 1980’s Zimbabwe while “Pumzi” (Breath), a film by Wanuri Kahiu, is the first Kenyan sci-fi set 35 years after World War III. “Saint Louis Blues” (pictured above) by Senegalese filmmaker Dyana Gaye might well be the first African musical about public transportation. ESSENCE.com spoke with ‘Africa First’ supervisor Kisha Imani Cameron about how the three films are setting the tone for a new voice in African cinema. ESSENCE.com: Firstly, what inspired the ‘Africa First’ program at Focus Features? Kisha Imani Cameron: I’ve been doing African cinema for a little while and what we’ve been discovering is that there’s this amazing class of young filmmakers who maybe haven’t done feature films yet but were on the continent making amazing short films and documentaries. So I approached James Schamus (CEO of Focus Features) and we talked about that. It is a really unique opportunity. We give $10,000 to five filmmakers from the continent to go towards their first feature film. Mentorship is the other part of the equation that we feel really strongly about because it provides an opportunity for exchange and a chance to really build a relationship with filmmakers from the continent. We’re really excited about this year’s results. ESSENCE.com: How did you pick the three films currently screening at Sundance? Cameron: Actually, Sundance selected the films to screen. What’s unique about this year’s program is that the chosen filmmakers are all women, which is unusual. In the same way that women are underrepresented in Hollywood, women are also underrepresented in African cinema. What we have here are three distinct voices, coming from three different places on the continent. You’ve got a musical, you’ve got a sci-fi film, you’ve got a drama about a young girl. You get a sense that this is something different. This is not your father’s African cinema. People have a preconceived notion of what African cinema is and how that looks and these films literally break that mold apart because they’re not like anything you’ve ever seen before. ESSENCE.com: What about the storytelling is unique? Cameron: Well I think it’s a few things. It’s obviously the sensibility that the three filmmakers are coming to the table with, talking about the environment, for example, from an African perspective. I think it’s unique because it’s a new generation of African filmmakers, so you’re talking about people whose influences aren’t just European. They’re looking at films from Brazil, films from America, other African filmmaker–you can see the variety of film influences on their work in a way that I think is unique to filmmakers from the continent in their 20’s and 30’s. In the process they’re reinventing what our conception of African cinema is and that’s what’s really exciting. People just look at African cinema and think it’s one thing; one kind of story about one kind of experience and actually these filmmakers are coming out here and doing things that are very varied and different. For more information about screenings and the ‘Africa First’ program, visit Focus Features.