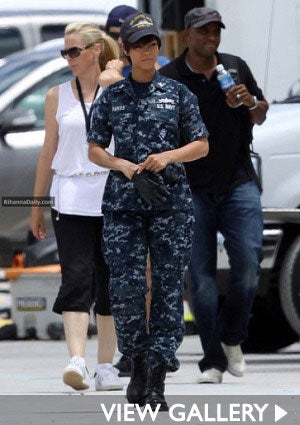 Take a look at Rihanna in head-to-toe U.S. Navy gear on the set of the upcoming sci-fi thriller “Battleship.” The movie is a jump-off from the old school board game, but this time the world’s navy ships battle alien intruders. According to a recent twitpic of Rihanna on a hotel balcony in Hawaii — featured in this week’s Twitter Watch — she will be filming for the next two weeks. The caption said, “HAWAII… Hawaii… hawaii…… who wouldn’t want to work here for 2 weeks?”