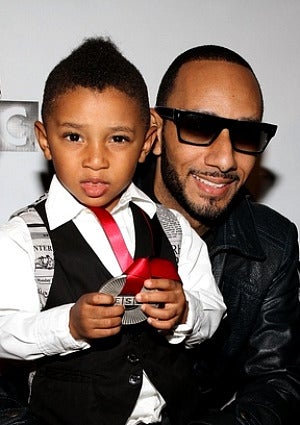 Last night in NYC, SESAC honored many of today’s most prolific and prestigious songwriters and publishers at the 14th annual SESAC Awards. SESAC, the fastest growing performing rights and protection organization in the US, held its annual awards dinner, comparable to the Grammys for the macks in the back who pimp the pen.   Like the Grammys, the dinner brought out the stars and industry elite. In attendance was big winner Kasseem “Swizz Beatz” Dean, sans Ms. Keys, presenter Russell Simmons and his niece Angela, singer Estelle, songwriter Rico Love, Island Def Jam’s Phil Robinson, and others.   Held in NYC’s swanky IAC building, the red carpet gala was hosted by SESAC VP Trevor Gale, who presented awards in a multitude of musical genres. The most notable awards went to Swizz Beatz, who received the “Inspiration Award” for his song — which raised millions of dollars for Haiti — called “Stranded (Haiti Mon Amour),” co-written with Bono and performed by Bono, Jay Z and Rihanna. Swizz, who had his son with him, also won awards for “I Can Transform Ya,” performed by Chris Brown, and “Never Ever,” performed by Ciara. But the biggest awards of the night by far, Songwriter of the Year and Publisher of the Year, were swept by Nate “Danja” Hills and Danjahandz Publishing, who wrote the SESAC Song of the Year, Keri Hilson’s “Knock Me Down.”   In other categories, the ladies represented to the fullest. Angela Haute, who wrote the mega-hit “Empire State of Mind,” was honored when they used her song to open the ceremony, sung by the adorable youth choir of NYC’s PS22. K. Briscoe, another beautiful Black woman, accepted her award for the pop smash, “Womanizer,” performed by Britney Spears.   Other songwriters who received awards for the night were Jaylen Wesley for “Beautiful,” sung by Akon, Jay Fenix for “It Kills Me, ” by Melanie Fiona,  Rico Love for “Sweet Dreams,” by Beyonc. The night concluded with the attendees leaving with a deeper appreciation for the men and women behind the music.