All of my adolescent dreams are coming true tonight. Drake and Rihanna might actually be a thing, and my poor little heart can barely take it.

Drake and Rihanna met in 2005 when she was shooting her first music video “Pon De Replay” in Toronto at a little restaurant called Avocado.

He was simply known as Aubrey Graham then, a kid who starred on a show called Degrassi: The Next Generation as wheelchair-bound Jimmy Brooks and was looking to make it big in the music industry.

Fast forward 11 years later and the “Hotline Bling” artist let it be known that the original Bad Gal is the one who has always had his heart.

While presenting one of his “best friends” the 2016 Michael Jackson Vanguard Award at the MTV VMAs tonight, Drake professed his love for the Bajan beauty and gave a complete rundown of her humility, major work ethic and the many other reasons she’s so deserving of the honor. Rihanna accepts the 2016 Michael Jackson Video Vanguard Award from Drake and thanks her country, her family and her friends.

“What’s most impressive is not the endless stats, awards and accomplishments,” he said. “What’s most impressive is the person. Some artists need to be someone else to achieve some others have to downplay their own natural instincts to blend in. She succeeds by doing what no one else in this music industry does and that’s be herself. This woman has been supassed all competition while still being the same girl from Barbados surrounded by the same friends, speaking with the same accent…and we love the music which can change styles from album to album. We love the videos which change their artistic vision from year to year but most of all we love the woman who hasn’t changed since day one. She’s someone I’ve been in love with since I was 22 years old, she is one of my best friends in the whole world. All my adult life I’ve looked up to her even though she’s younger than me and she’s a legend in our industry.”

Say what you want but Mr. Graham is totally smitten with the “Love on the Brain” singer, so much so, that he even gifted her her very own billboard as a nod to her newest accomplishment.

As the two exited the stage, there might have been a kiss and there was definitely some hand holding too, and it’s absolutely 100% fair to say I vote Aubrey and Robyn as the VMAs king and queen from now until forevermore. 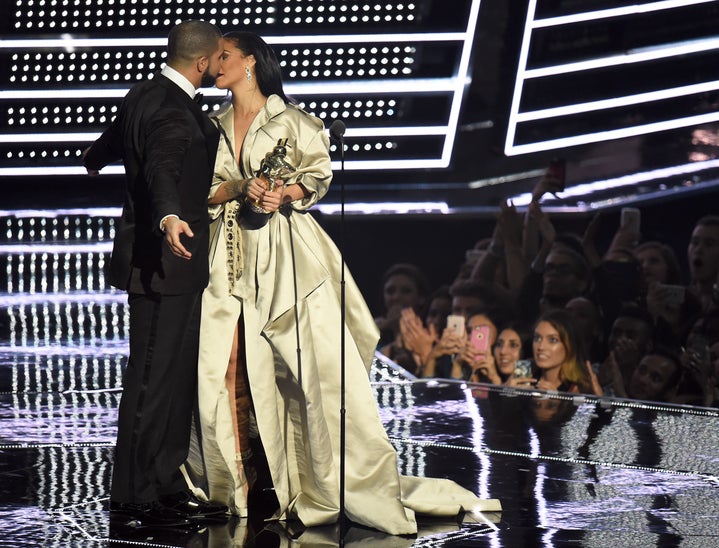