It seems in the past few months alone that a number of female celebrities have had to set aside time out of their busy, daily schedules to explain to the masses just how little they care about your opinion when it comes to their outfits, bodies, or general existence. Chrissy Metz let the Internet know exactly what they could do with their thoughts on her custom latex dress, Blake Lively doesn’t want to discuss her dresses at all, noted social media clapback-machine Ariel Winter has been on an indefatigable one-woman body positive crusade, and on Monday Rihanna made her opinion of a certain sports writer who attempted to police her waistline widely, and hilariously known.

And that same night, the pop star was back out again, wearing an outfit that makes one thing crystal clear: the baddest gal in the business is going to wear exactly what she goddamn pleases. 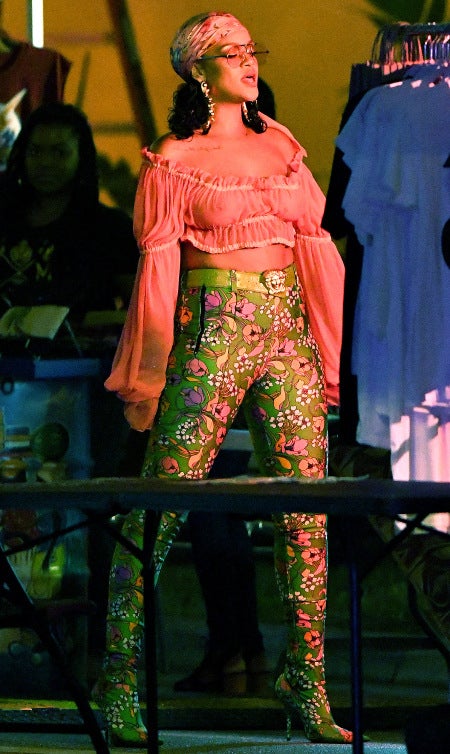 The musician is currently in Miami to shoot a music video with DJ Khaled for his upcoming album Grateful, filming in the city’s Little Haiti neighborhood wearing one of the cutting edge, fashion forward ensembles we’ve come to know and love her for. While Riri has been favoring hugely oversize, menswear-inspired looks as of late, last night she brought all of the body that has been so hotly debated over this past week, showing it off in a barely-there top and skintight pants.

Despite being busy with her many careers, which include being a fashion designer, an actress, a burgeoning cosmetics company founder, and Harvard’s Humanitarian of the Year, in addition to being a world famous pop star and all-around queen, Rihanna still found some time to also give us all life.

To shoot the music video, the singer wore a completely see-through red peasant-style crop top with extra long blouson sleeves and a pair of neon green floral print Balenciaga pants slash boots which she accessorized with a Versace lime green belt, a pair of shoulder-grazing spiked hoops, tinted aviators, and a pink floral silk headscarf. As Riri warned us herself just a few hours earlier, if you can’t handle her at her 2007 Gucci Mane, you don’t deserve her at her 2017 Gucci Mane.