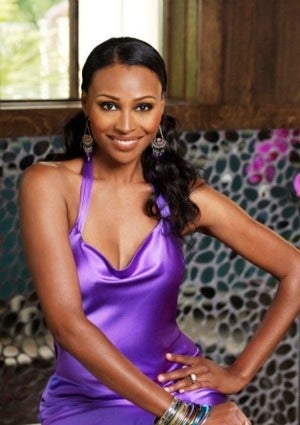 A gal should never have to choose between her man and her friend. Just ask “Real Housewives of Atlanta” star Cynthia Bailey, who on a recent episode struggled to juggle her anytime minutes. Unfortunately, her attempts to (equally) cater to her man Peter, and support her girl NeNe, landed her between the proverbial rock and a hard place. Cynthia sat down with ESSENCE.com to discuss the sticky situation. ESSENCE.com: Last week Peter almost banned you from talking to NeNe on the phone while he’s at home. Did you think that was reasonable? CYNTHIA BAILEY: I think ban is a strong word. I think he voiced his opinion. You guys see a snippet but the situation was this: Peter was going through his thing at the restaurant, NeNe was going through it with Greg, and I was planning a wedding. All are very stressful. Fast-forward to me, Miss Pieces Peace and Love, I end up trying to be too many things to too many people. I was spending a lot more time on the phone with NeNe than I was paying attention to Peter’s situation. I love my friendship with her but I also cherish my relationship with Peter. I didn’t appreciate being stuck in the middle and I didn’t feel like I had to choose. If they have an issue they should work it out. Because I hadn’t planned on NeNe and Peter being good friends. I was friends with her; I don’t have that kind of relationship with Greg. ESSENCE.com: A lot of women have been in similar situations. Do you have any advice for women on how to handle this? BAILEY: I can tell you the way I handled it. I talked to NeNe and tried to explain Peter’s situation and it wasn’t like ‘I can’t be on the phone with you 20 times a day anymore’ but more like ‘it’s a really crazy time for everyone and I need to give Peter more attention.’ On the flip side, I told Peter ‘I really love my friendship with NeNe and I know it seems like I’m giving her a lot of my time.’ I was a sounding board for NeNe, like Peter said. I told him, ‘I really want to be there for her and if I needed a friend, I’d want her to be there for me. And he understood it. So, just keep your communication open. If your man loves you, then he’s going to be with you and work past it and if your girlfriend is your girlfriend, she’s going to understand and work with you. No person should have to choose between their man and their friend. ESSENCE.com: Did Peter’s restaurant, Uptown, end up closing? BAILEY: Yes, we closed about three months ago. And we actually take you guys through the process on the show. I think people can relate because of the recession. A lot of people have lost their businesses. It was really difficult to go through during the show while shooting.