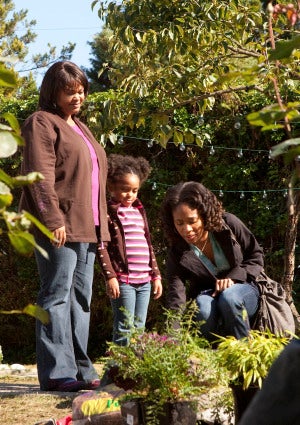 You know that old adage, “You can’t go home again?” Well, after watching “Sins of the Mother,” you might get the feeling that you can return to your roots, if you can open your heart to forgive.
On Sunday, Lifetime Movie Network will air “Sins of the Mother” starring Jill Scott as Nona, a reformed alcoholic who is determined to stay sober and reconnect with her grown daughter, LaShay, portrayed by Nicole Beharie. The problem is, LaShay–or Shay, as she now prefers to be called–is still harboring pain and hurt from her past. Sadly, she’s not dealt with the residual affects of being raised by a single parent who chose the bottle over motherhood.
“Nona is in a constant, internal fight,” Scott tells ESSENCE.com of her character. “She’s on the path to redemption, but she’s also trying to be still so that her addiction doesn’t get the best of her.”
Based on Carleen Brice’s bestseller, “Orange Mint and Honey,” the story is set in Tacoma, Washington, where Shay returns after a lackluster semester in school. Not surprisingly, she’s on-edge, even before she steps foot in her mother’s door and meets her five-year-old sister for the first time.  Hence, the battle between mother and daughter ensues and Nona’s once-peaceful cottage becomes a war zone.
Though her anger is real, and justified, Shay’s journey is one that can’t continue until she combs through her emotions, one agonizing step at a time. But first, she’s got to release some of the baggage that’s been weighing her down. “Forgiving and asking for forgiveness can be very difficult,” adds Scott, “but it’s mandatory if you want to grow. Otherwise, you’ll find yourself stuck in one place.”
“Sins of the Mother” is definitely worth your time, especially if there’s someone in your life you need to forgive…even if that someone is you.
“Sins of the Mother” airs on Lifetime Movie Network this Sunday at 8pm EST. Read more:
Loading the player...