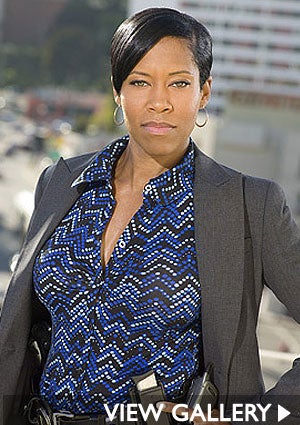 Who wasn’t thrilled to see Regina King, as Detective Lydia Adams, on “Southland” last spring? She was tough, yet cool, and although she seemed so in control while policing the wicked streets of Los Angeles, she was nowhere near as poised in her personal life.  We tuned in and got hooked. Then came the cliffhanger, followed by a promise of a full, fall season.  King even had her own ads, which were plastered on billboards everywhere and ran in a gang of women’s magazines.We were amp’d–until NBC unceremoniously canceled the show, just weeks before its October 23 premiere date.

Although no one wanted to admit it at the time (not out loud, anyway), it was obvious that the crime drama’s life was cut short as the result of NBC’s ill-fated, primetime shuffle, which landed the now-cancelled Jay Leno Show in the coveted, 10pm timeslot. What a mess! The good news, for us, is that TNT responded to “Southland’s” momentum by picking up the series, which premieres tonight, at 10pm, commercial-free.

The cable network has also been gracious enough to press rewind so that viewers can get up-to-speed.  They will begin by airing the first, seven episodes, followed by the six, new shows that were already in the can when NBC pulled the plug.  According to TV Guide, TNT will decide whether to order more episodes based on the show’s performance.

That’s enough network talk.  Let’s get back to Regina King. So, what can we expect from her character? Your guess is as good as hers.

“I’m still learning about Lydia, but what’s definitely clear is that she very seriously loves her job,” she’s said.  “I’d like for her to be recognized for being strong, but vulnerable, and not to come off as ‘too hard.’  I also think that we’re going to delve more into her personal, love life.  We’ll see!”

Along with her role on “Southland,” King, who’s remained steady on her Hollywood grind since her early days on “227,” will next appear in the comedy, “Our Family Wedding,” opening March 12.

Check out a gallery of Regina King’s memorable roles throughout her career.