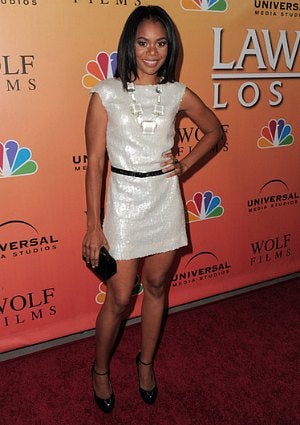 Actress Regina Hall plays ambitious Deputy District Attorney, Evelyn Price on “Law and Order: Los Angeles.” Hall, who has a BA in a journalism, says she didn’t have to reach far to find the truth-loving part of herself in order to play Price. “I’ve always loved shows like “48 Hours” and “Dateline” and I’ve always been passionate about getting to the truth, and journalism,” she said. The “Death at a Funeral” star spoke to ESSENCE.com about “LOLA” (as the show’s been dubbed) and reuniting with “Best Man” costar, Terrence Howard on the show. ESSENCE.com: How did you get into your character, Evelyn Price? REGINA HALL: I went to visit and trail some DA’s in Los Angeles, and sat in on some of the hearing just so I would understand the process of what I was talking about. ESSENCE.com: So who is Evelyn Price? HALL: She’s a smart and intelligent Black woman who’s used to winning. She’s a layered being who has had a few disappointments in her life and she masks all that type of emotion with what she knows and believes to be true, and that’s the law. ESSENCE.com: A lot of the story lines on the show are ripped from he headlines. As an LA girl were you familiar with any of the stories you’ll be reenacting on the show? HALL: Yes, a little bit because I’m always watching the news. ESSENCE.com: Are you reuniting with Terrence Howard on the show? HALL: No, I actually don’t work with Terrence. I work with the other District Attorney, actor Alfred Molina. We each have our own Deputy District Attorney’s and Terrence works with a wonderful actress named Meghan Boone. But I’m sure at some point we will cross paths on the show. ESSENCE.com: We were hoping for a “Best Man” reunion up in there. HALL: [laughs] I know right. “Law and Order: Los Angeles” airs Wednesdays at 10pm on NBC.