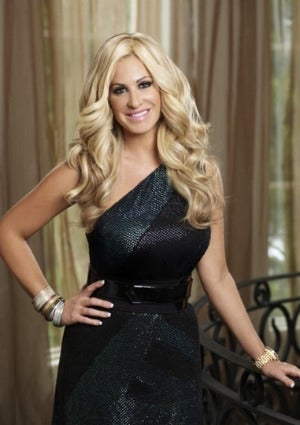 It’s time for another season of “Real Housewives of Atlanta,” better known as your favorite guilty pleasure, and Bravo’s highest rated show. Between NeNe’s strong personality, Sheree’s shade and Kim’s use of the word “girl,” it’s honestly too much fun to miss. But this time around, Lisa Wu Hartwell is gone and lawyer Phaedra Parks and model Cynthia Bailey join the cast. We’re kicking off our “Housewives” love-fest by chatting with veteran cast member, Kim Zolciak, about her wigs, what happened to Lisa Wu, and her new younger man. So long, Big Poppa. ESSENCE.com: What’s special about the third season of “Real Housewives of Atlanta”? KIM ZOLCIAK: My life’s really different, I have a new wig. My hair looks a lot better honey, that’s what happens when you have your own wig line. I used to go the grocery store looking a hot mess and I can’t do that anymore. My kids are older now, one’s in middle school, she’s dealing with the show and the press. My personal life is really different and you’ll get to see that unfold this season. ESSENCE.com: Will any rivalries arise between the ladies this season? ZOLCIAK: Not so much rivalry as much as we all have our own personal dramas going on, we all have big moments in our lives that go on this season. Rivalry is inevitable, but most of it’s personal drama rather than between the ladies. ESSENCE.com: What can you tell us about the new “Real Housewives” character, Cynthia? ZOLCIAK: She’s a model? She’s definitely close to one of us, but it’s not me. ESSENCE.com: What about the loss of cast-mate Lisa Wu Hartwell? ZOLCIAK: I was never close to Lisa so I’m not going to miss her. I was so over all of the companies she said she owned, so it was fine when she left. But I think Phaedra and Cynthia are great additions to the cast. ESSENCE.com: After the success of “Tardy for the Party,” do you have any new music? ZOLCIAK: Yes, I actually have a new song called “Google Me” coming out October 5 and I’ve also worked with Kandi Burruss. You’ll get to see that unfold as well. ESSENCE.com: You’re rapping on “Google Me”? How was that? ZOLCIAK: I don’t listen to rap music, I was actually nervous about rapping on it. One of the song writers that wrote the lyrics with me said ‘I really think you should rap.’ So I actually got in the studio, and I started to rap and the producer and everyone in the studio jumped up in the studio like ‘Oh my gosh, we have a future rapper.’ I only had to do the rap one time, I loved it! It’s just a different energy, it’s fun and catchy. It’s kind of like Fergie’s “Glamourous.” ESSENCE.com: How’s the wig line coming? ZOLCIAK: It’s available by custom order only. They’re very expensive right now, I’m trying to launch a line for middle America, per se. They’re thousands of dollars right now and I’m struggling to find a hair quality that I like in the price range of $300-$600 instead of $5,000. ESSENCE.com: Any acting in your future? ZOLCIAK: I did a movie, “The Joneses,” with Demi Moore and David Duchovny, I was with Sheree, we were extras. Girl, those are some long hours. I’m used to reality TV where you live your life and they just follow you around, that was a lot until 5 a.m. Reality seems to be right up my alley. ESSENCE.com: We hear you’re writing an instruction manual? ZOLCIAK: I’m writing a book on how to land your own Big Poppa. It’s kind of about the fact I have a strong personality. My dad always said that I was a man in a woman’s body, the way I look at life and how I’ve treated my relationships. ESSENCE.com: Speaking of your love life, is Big Poppa officially out of the picture? ZOLCIAK: Come on girl, I’m dating someone completely new. I’m very happy, I’m completely over [Big Poppa]. I’ve been dating this person for five months. He’s a doll baby. ESSENCE.com: Tell us about your new “doll baby.” We hear he’s 24… ZOLCIAK: He just turned 25 years old on September 12. People are calling me a cougar, but I’m 32 he’s 25. I’ve never ever dated someone younger than me. My ex-husband is five years older. We just have a great connection, we’re still together and it’s been five months. I’m really happy and I don’t really know how it happened. You’ll get to see how my personal life unfolds on the show, he’s great with my girls. He’s not the typical 25 year-old minded, he’s not partying every night and maybe that’s why it works. ESSENCE.com: Where did you meet your young thing? ZOLCIAK: Watch the show, honey! You’ll get to see it from the very beginning. ESSENCE.com: What do you say to rumors that you’re only a couple to gain publicity? ZOLCIAK: Honey, he hates the publicity. When we first hit the fan, it was a little stressful for he and I. He’s from Montana. I had to film a short scene with him and he said he wouldn’t do it. He just doesn’t like it and at the end of the day, we know what it is. He’s doing fantastic, with or without me. Being with him and going to his games, it almost becomes a problem because the Atlanta Falcons want it to be about the Falcons, not about Kim attending the game. So it’s been difficult, but we’re past that now. But I’m positive he’s not into the fame and I can’t say that too much about too many other people. ESSENCE.com: Finally, what separates the Atlanta “Housewives” from the other cities? ZOLCIAK: I don’t really watch the other “Housewives,” Atlanta’s on it’s own. We’re the highest rated from the first season for a reason. Our personalities are strong and we’re all a little bit crazy. For more of the “Real Housewives” drama you love, click here.