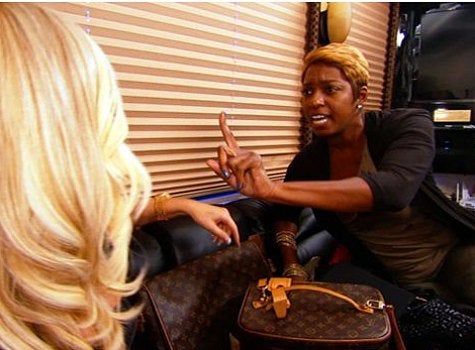 Oh lawd, why did Kim call NeNe the B-word on last night’s episode of “Real Housewives of Atlanta”? Only their Louis Vuitton (diva-style) luggage separated these supersized personalities from putting up their dukes.

Not only did Kandi make the mistake of inviting Kim on the road, she also allowed her to bring her barefoot chain-smoking, trash-talking sidekick Sweetie along. To top it off, Kim invited NeNe on the tour bus, and from there all hell broke loose, or as one of our Twitter friends tweeted, the Civil War was relived.

The Smoke and Sing Tour
Dear Kandi, meet Kim, she likes cigarettes, trash-talking and wine. If you can provide Kim with these essentials then you are more than welcome to invite her to go on a singing tour with you. But be warned, she will not magically morph into the consummate professional that you are, and there will be drama, lots of it. Poor Kandi was all types of irritated with Kim and Sweetie’s antics on the bus, from demanding a smoke break every 30 miles, to trash-talking and snapping on her. Somehow Kandi kept her cool though, even allowing Kim to invite NeNe onto the bus even though her gut was telling her not to.

The Fight That Ended a Friendship
Like objects, two alpha females can’t occupy the same space at the same time. Kim and NeNe are the true epitome of frenemies, and when these two are together and there is drink involved, anything goes. Now everyone knows Kim cannot sing, and that’s part of the humor, really. But NeNe felt the need to tell her just how “ridiculous” she sounds. “You think you’re Lady Gaga,” she screams. “You’re second best and you know it.” In her twisted way of trying to stand up for someone else’s rights NeNe says that her real problem is the way Kim treats her assistant Sweetie. Um, really? This one’s hard to believe considering that NeNe can’t stand Sweetie. NeNe calls Kim a “dumb blonde” to which Kim retorts, “You’re a dumb bitch.” Oh lord why did she go there? This took NeNe to another level of crazy and she lunged across the room at Kim. “As soon as she got out of that seat, I knew our friendship was over,” Kim told the cameras. “Never again!” Yeah right, they said the same thing last year. Only time will tell.

Mo money, mo problems
Peter and Cynthia are still fighting over money when he decides to close the Uptown nightclub just weeks before their wedding, without telling his wife-to-be. When he does tell he can’t seem to understand why she’s a tad uneasy. Really Peter, you just squashed this beautiful lady’s dreams of getting married with a little financial security and you’re wondering why she’s getting all worked up? Ever the understanding husband, Peter swears he’ll find the $20,000 they need for the wedding, but not before telling Cynthia that he’ll “never ever” tell her anything ever again. Way to start a marriage, buddy.

In other notable moments, Sheree has to coax her children into saying they’re going to miss her while they’re with their father in California. We find out that Apollo has a 9 to 5 and wishes he had breasts so that he could take care of baby Ayden Adonis. Derek J. shows us what he’s got in a pair of too-tight Daisy Dukes and camouflage stilettos in rural Georgia. If only we had that much bounce in our walk. Leave it to Derek J. to steal the scene.

Here’s a sneak peek of a tear-filled Cynthia during her bachelorette party in Miami.