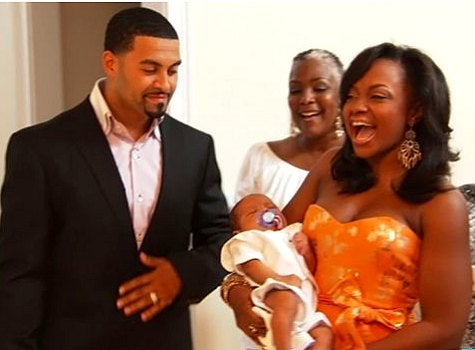 Leave it to Phaedra Parks to introduce us to some rituals we’ve never heard of. On last night’s episode of “The Real Housewives of Atlanta” the self-declared “Southern belle” debuted a little-known tradition called a “Sip & See” where revelers come and marvel at a newborn baby while sipping on mimosas and Bellinis (so not “boughetto” this time — she’s fancy, huh?).

We also got to witness an unexpected truce between Phaedra and Kim, while a quiet war seemed to be brewing between Kim and Kandi’s tour manager, Don Juan. Find out what else had us excited about last night’s episode…

Southern-Fried Tradition
Phaedra Parks is a woman of means, and don’t you ever forget it. Everything she does must have a capital C-L-A-S-S so it’s not surprising that baby Ayden’s unveiling would look more like a champagne brunch. No stopping by for a casual visit to see the baby here, no ma’am. Phaedra organized a “Sip & See” where friends and family could come and ogle at baby Ayden, but don’t touch. This little-known tradition whipped up quite the debate among our Twitter friends. “I’m a southern girl & I’ve never heard of a sip & see… and I’m bougie!” tweeted Allie Good, while Cathi wrote, “A sip and see must be a Southern thing. It’s more like a gulp, gawk and gossip.” Whatever the case, mimosas and Bellinis are always a good excuse to go see a baby, don’t you think?

Can We Work It Out?
Cynthia and Peter are having financial problems, which clearly put a damper on their upcoming wedding. Cynthia invested “tens of thousands of dollars” (her words) into Peter’s Uptown restaurant and she wants to see some of her cash-money back, so she suggests he sell the place before it goes under. If only it were that easy. But no worries, actor Hill Harper comes to the rescue to offer some sage relationship advice. Things are really tense between these two, but kudos to them for letting cameras in on such a touchy subject. Money troubles or not, Peter, don’t you dare mess with Cynthia’s dream of getting married at the museum under a dinosaur.

The Tour Didn’t Mean a Thing
Bravo appropriately titled this episode “Tour-Ture” and that it was, especially for Kandi, who had to deal with Kim’s diva demands, which include whining about the tour bus being too small (It’s like a Motel 6″ she says), not being able to smoke (this isn’t the smoke, drink and sing tour, honey). Kandi’s tour manager, Don Juan, goes in on Kimmy, telling her the message of “The Ring Didn’t Mean a Thing” is all wrong since she had an affair with a married man. Kim thinks no one will make the connection (honestly we didn’t, did you?), and that Big Papa never cheated on her. “Let’s be real, are you being delusional right now?” says Kandi. It wouldn’t be “RHOA” if Kim wasn’t saying or doing something delusional.

In other plotlines, Sheree was not featured in this episode except to discuss donkey and reindeer butts with Phaedra while they were power walking. NeNe didn’t show up much either, and when she did it was at her new job as an entertainment reporter. Her interview with Jermaine Dupri was all types of wrong in the beginning (her bad questions meant one-word answers from Dupri), but the budding reporter soon put her best NeNe Leakes on and the interview seemed to go smoothly from there.

What was your favorite moment from this week’s “Real Housewives of Atlanta”?

Here’s a look at NeNe’s first day on the job: