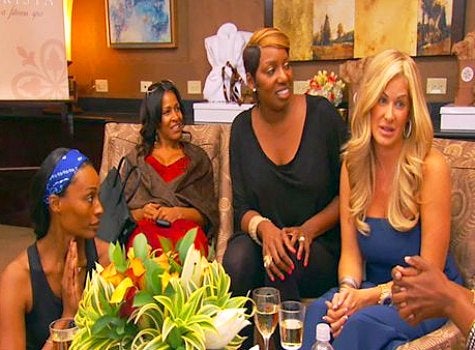 You couldn’t ask for more opinionated reality stars than the ladies of “Real Housewives of Atlanta.” And on this week’s episode there was enough trash-talking to make even “Wikileakes” NeNe Leakes hush up. That, and Phaedra mentioning that she knew a stripper whose member was so large he could give himself oral sex, was enough to make this one feisty episode. Southernplayalistic Just because Phaedra is a mother, lawyer and businesswoman doesn’t mean she doesn’t know a thing or two about strippers. The self-described “Christian Southern Belle” almost knocked our socks off when she casually mentioned knowing a stripper who was so well-endowed he could pleasure himself. Honey chile, we have heard a lot of things come out of this Georgia peach’s lip-glossed mouth, but this takes the cake. It’s too bad the ladies were too busy arguing to absorb what she said. Besides, we can’t comprehend why such a (ahem) respectful Southern lady would mix with such company. Psst, Phaedra, call us, we Northern gals like show and tell. Put Up Your dukes Tonight we learned that Phaedra is woman of her word, and as she promised in a previous episode, she “put [Kim] in check” and asked her about all the “chatter” about her newborn baby being an alien. We already know how Phaedra feels about Kim’s relationships with men, so it wasn’t surprising that she thought a spa date was the most appropriate time to drop a bomb about Big Papa being in foreclosure. To which Kim replied, “I don’t run around talking about your husband being a convict.” Ouch. These are two people who’ve met their match. Kim stood her ground and had her verbal ammunition ready for any of Phaedra’s “crazy Black woman” jabs, but somehow Phaedra saw it as Kim backing down.” What did you think? Did Kim back down? Pounce for Pounce Before Phaedra and Kim could face off, Kim and Cynthia got into it about the “friend contract” (cue creepy music). Cynthia thought it was a joke, Kim thought it was weird. What’s new, really? These two are always on opposite sides of the coin, especially when it has to do with their friendship with NeNe. And besides, as one ESSENCE Twitter follower said, “NeNe, girl you were wrong for telling Kim and the other ladies about the ‘friend contract.'” But we’ll leave it at that, because getting on the wrong side of NeNe Leakes’ (nicknamed “Wikileakes” by Bravo’s Andy Cohen) bad side is never a good idea. In Other RHOA Moments… Cynthia says she wants to get married under a dinosaur (at a museum), Kandi and Kim are meant to be rehearsing for their upcoming tour, except Kim is more interested in bedazzling their microphones than learning the routine to her songs. And a newly employed NeNe Leakes resorts to calling every celebrity she knows to get an interview for her new job at Atlanta’s WXIA-TV’s “11 Alive,” while Sheree surprises her daughter with a $7,400 furniture makeover, and it’s not a Tarjay (Target) moment. Did we expect anything less? After all, This is the same lady who brought us “She by Sheree.” Here’s a sneak peek of next week’s episode:   What were your favorite moments from last night’s episode of “Real Housewives of Atlanta”?