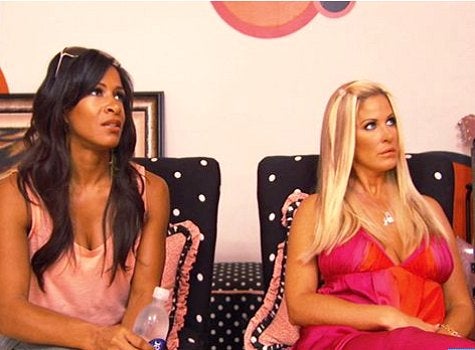 So you think you can dance, Kim Zolciak? “I don’t really know,” said our favorite wiggy blonde on “Real Housewives of Atlanta” when asked her vision for her upcoming tour with Kandi. “You’re not going to have me doing splits and sh*t,” she added, clearly excited… not. Meanwhile, Sheree is over the moon over her budding acting career, and Phaedra is clearly peeved at some comments a little birdie named Dwight told her about the ladies. Most memorable about the episode was the “Single Black Female” (NeNe’s words) moment between NeNe and Cynthia. Find out about Cynthia’s “friend contract” and other moments that had us glued to our tellies last night. You Are My Friend (cue Pattie Labelle singing) Remember that blowout between NeNe and Peter last week? Well, it really shook Cynthia up, so she decided to take some action and present NeNe with a “friend contract” just to be sure these kinds of scuffles don’t happen again. Can you blame Cynthia for wanting to be clear about the terms of their friendship? It’s hard to find a loyal BFF these days. Though she did up the cringe factor by adding something about a notary public and the President having to sign off if they wanted to end the friendship. “This is some single, Black female sh*t,” declared “Wiki Leakes, NeNe Leakes.” Sheree’s Big Break… kinda Sheree finally gets a callback from Atlanta’s biggest talent agency, and she is officially in. Yippee! It’s too bad her first real acting job in a play called “Child Support Man” (classy) was more like a cameo. We watched with excitement as Sheree prepped for her big night, even inviting Kandi over to rehearse her lines. When the curtain went up and she didn’t have but two or three lines, even the ladies couldn’t mask their disappointment. “I’m ready for film,” announced Sheree after her play. As we’ve come to learn, nothing gets in the way of Sheree “Who gon’ check me boo?” Whitfield, but as Cynthia says, the chitlin’ circuit is a long way from Hollywood, boo. Dwight… De-Wrong We haven’t seen much of Dwight this season, but when he does appear you can bet there’s some drama to follow. NeNe’s former BFF pays Phaedra a visit and starts dishing on how the ladies have been taking smack about Phaedra’s baby behind her back — much of which is inaccurate. Phaedra eats it all up and is ready to smack the next woman who concerns herself with the working of her vajayjay. “Why they all up in my Kool-aid?” she asks, clearly not in the mood to be messed with by some “uneducated hooker” (Kim). In other moments, Kim invites the ladies to her place for a “get-skinny” treatment so she can lose weight before she goes on tour, and Peter apologizes to NeNe. NeNe declares they are “back in love” and back to their flirting ways. What was your favorite moment from this week’s RHOA? Here’s a sneak peek of more of Kim’s moves next week: