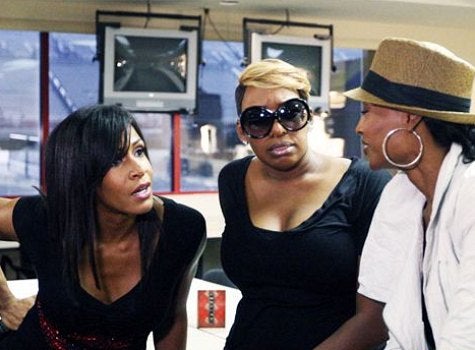 A more subdued and somber-looking NeNe Leakes emerged on this week’s episode of “Real Housewives of Atlanta.” She’s so down that she goes into hiding because of the embarrassment Gregg has caused. On the lighter side of things, Phaedra’s son Ayden did what all newborns do when left diaper-less and placed near mommy’s crisp white shirtdress: he pooped.  Sheree Whitfield is kicking her acting career up a notch by auditioning for a group of agents, while Kim Zolciak finally returns to vocal coach Jan Smith who helps her wail, we mean, sing “The Ring Didn’t Mean a Thing.” Find out what other moments had us singing la-di-da about this week’s “RHoA.” Woe is She Clearly going through it over her crumbling marriage, NeNe tells her friend Diana that she’s so embarrassed she won’t leave the house. “[Gregg] goes to the basement. I just came to my room. That’s how it is for now,” she says. Diana convinces her to go the racetrack where the NeNe we’re used to emerges. She confronts Cynthia’s husband Peter Thomas about why he is giving her the cold shoulder. But it wasn’t about NeNe as Peter lets it be known that he’s got his 99 problems (his restaurant is suffering financially) and NeNe isn’t one of them. Homie, Lover, Friend Kim Zociak’s friend, er, lover (we can’t keep up) DJ Tracy Young shows up to act as moral support as she returns for more voice lessons (and lashings) from Jan Smith. “You know what the word pretentious means?” asks Smith, clearly not in a mood to coddle Kim or her cracking voice. You gotta give it to Kim for knowing she’s tone deaf but still killing us softly with “The Ring Didn’t Mean a Thiiiiinnng.” As Sheree points out, Kim knows how she sounds, but she’s singing her way to the bank. Check that, boo. But Can She Act? Sheree’s acting coach tells her about a new play called “Child Support Man” to which she says she’s all too familiar with the subject matter. But when told there’s no pay, Sheree gives us a pearl of a one-liner. “I know a lot of actors and actresses probably start out working for free, but I’m a grown-a** woman with grown-a** bills!” she says. While it’s clear Sheree won’t be on an Oscar ballot any time soon, somebody give her an award for Best Reality TV quotable/notables. Besides, who needs the actress Sheree Whitfield when the real one is way more saucy (and dramatic)? Caught in the Middle Peter is frustrated over his business more than ever and needs Cynthia’s shoulder to cry on, but she’s a tad preoccupied with being NeNe’s sounding board. Peter lays down the law of the land and tells Cynthia that her conversations with NeNe should happen when he’s not around. Clearly sensing what’s going on, NeNe complains, “I can’t stand women who listen to their man like that. Are you a puppet? Do you have your own brain?” Poor Cynthia, caught in the middle between two people she loves. Baby’s Little Surprise Leave it to Phaedra to wear white while taking a photo with a diaper-free baby. Baby Ayden Adonis lets it be known there’s a new sheriff in town by pooping all over his mom. And is it us or did Apollo suddenly become the primary caretaker? Even after poop-gate it’s Apollo who rushes to clean up the baby, not Phaedra. Ah well, we knew these were unconventional from the start. It’s good to see Apollo being so involved in being a dad. The Competitive Edge In case you didn’t know it, Kandi loves to win. Whether it’s trying (and she is trying) to make a singer out of Kim Zolciak, or revving her Mercedes to top speed so she can beat Sheree during their drag race, Kandi is always in it to win it which is why she is super annoyed that Sheree wins the race. Let’s hope Kandi’s tour with Kim is a winner. What were your favorite moments from this week’s “Real Housewives of Atlanta.”?