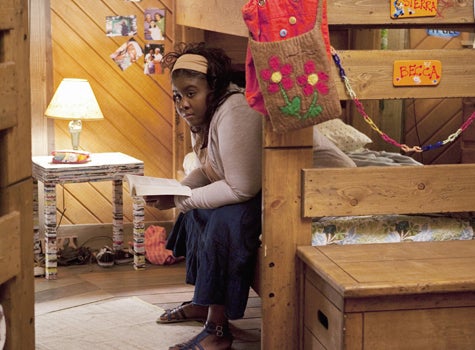 While other child actors are shackled and carted off to prison, albeit for less than 48 hours, Raven Goodwin is staying close to home. The 18-year-old Washington D.C. native has been acting since she was four-years-old and was nominated for “Best Debut Performance” by Independent Spirit Awards for her role in “Lovely & Amazing” by the time she was ten. Now Ms. Goodwin chatted with ESSENCE.com about her reoccurring role on ABC Family’s groundbreaking television series “Huge,” which follows kids at a weight-loss camp as they deal with body image issues. The show airs Monday at 9/8c. ESSENCE.com: How did you get into the entertainment industry? RAVEN GOODWIN: Growing up in D.C., I went to elementary like any other kid, but I was just always a little different. I had that sparkle and everyone told my mom ‘she needs to be on TV acting.’ They had me on tape, just talking like a little woman and eventually they took me to Linda Townsend, the major talent agent in D.C. at the time, who had Kellie Williams from “Family Matters.” I auditioned for her at four-years-old in my homemade cream outfit by saying “The Lord’s Prayer” and singing Monica’s “Before You Walk Out My Life.” She signed me and booked my first job one month later. ESSENCE.com: As a child, you were nominated for an Independent Spirit Award. Describe that experience. GOODWIN: I was nominated at 10-years-old and I honestly didn’t know what was going on. It was just fun. Looking back, it’s amazing that I was nominated at such a young age. I’m so thankful for that acknowledgement. I was also nominated for a best ensemble award from the Screen Actors Guild for 2003’s “The Station Agent” too. It’s a blessing. ESSENCE.com: Tell us about your character Becca Huffstatter on “Huge.” GOODWIN: “Huge” is a show about self-discovery and follows kids at a weight loss camp. My character is shy, so when she meets Nikki Blonsky’s character Willamena Rader who’s not, they become friends. ESSENCE.com: Critics have said “Huge” twists the concept of weight on its ear, do you agree? GOODWIN: I agree. The show is definitely not just about weight-loss physically. It’s more about finding yourself. It’s really funny because I realized at one of our table reads that “Huge” was really about the weight that we carry around mentally. For example, Dr. Rand, played by Gina Torres, is physically fit and gorgeous, but you can tell that she’s weighed down by her issues. She’s supposed to be in charge, but she’s more like a camper, not the counselor. It just goes to show that weight isn’t everything physically. Sometimes people can be heavier than you no matter how much you weigh. ESSENCE.com: Who are some of your favorite black actresses? GOODWIN: I love Queen Latifah and Mo’Nique has been doing an amazing job. Jada Pinkett-Smith, Nia Long, Halle Berry, Gabrielle Union and Kerry Washington are also really good. ESSENCE.com: At 18-years-old, what was the hardest lesson you’ve learned as a child actor? GOODWIN: The thing about this business is that you have to have tough skin and stick by the people who support you. Like me, I’m crossing over to adulthood, I am 18 but I’ll always keep my mom beside me. If you don’t have that support and you’re not humble, you’re not going to go a long way. It may feel like you will, but you won’t. If you truly want to succeed, you have to stay humble-humble or crumble-because it can all go away in the blink of an eye.