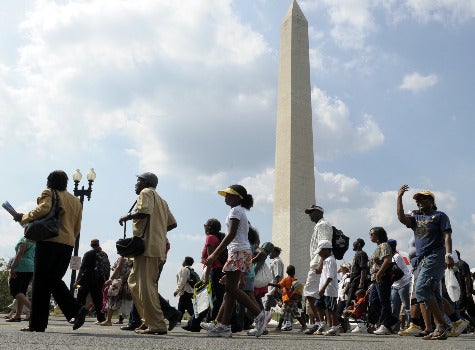 Since the election of President Barack Obama, we’ve seen numerous demonstrations from the political Right — fired-up Tea Party protests and Glenn Beck’s “Restoring Honor” rally, among others. By comparison, the other side has seemed pretty quiet. Not for long, says a sweeping coalition of progressive activists, students and union members who are planning an action of their own. On October 2, 2010, at Washington, D.C.’s Lincoln Memorial, more than 150 organizations — including the NAACP, Green For All, the National Council of La Raza and labor organization AFL-CIO — will hold “One Nation Working Together,” a rally for jobs, education and justice. “This is about getting groups united for the next Congress,” says NAACP president and CEO Ben Jealous, alluding to the event’s timing weeks before midterm elections. “We want to make sure the progress we’ve made continues.” The coalition supports policies that will expand access to jobs, education and justice — including the DREAM Act, which would create a path to citizenship for undocumented immigrant youth, brought to the United States by their parents, if they attend college or serve in the military — but stops short of specific advocacy for any the hundreds of other bills currently held up in the Senate, largely by Republican obstructionists. One Nation Working Together does, however, have post-rally action steps for its participants, called the “10-2-10 Model.” The three things they’re asking folks to do are: 1.    Ask ten friends to work with them on Get Out the Vote activities. 2.    Spend at least two days knocking on doors and making phone calls about voting. 3.    Show up with ten neighbors to the polls. “Our focus is getting people off the couch, getting people who voted in 2008 with excitement to realize how important they are,” says Jealous, who cites healthcare reform, the multiple extensions of unemployment benefits, and the narrowing of sentencing disparities between crack and powder cocaine as changes that have come about as a result of the 2008 election. “We want them to realize how much has been achieved because they made sure their voices were heard, and in fact we need them to stay engaged and keep advocating for issues most important to their communities.” With One Nation Together coming up this weekend, I wondered if organizers were concerned about getting the word out. After all, I’ve heard more buzz about the satirical marches planned for late October, headed by The Daily Show’s Jon Stewart and The Colbert Report’s Stephen Colbert. But with so many different civil rights, peace, student and labor organizations already involved, planners are confident. “Tens of thousands of people are rolling into Washington DC on October 2nd to bring the issues that all of our families face to the nation’s capital” says Phaedra Ellis-Lamkins, president and CEO of Green For All. “Stewart, Colbert and Beck are entertainers. One Nation is the only rally this fall that actually deals with real issues.” As for those voters who were so mobilized about voting in 2008, but are less energized about November’s midterms? Organizers confident about their message reaching them too, even if they can’t make it to Washington. “I think when the people who worked to get Obama in office see the march, they will feel a bit of a rush,” says Angela Glover Blackwell, founder and CEO of PolicyLink research institute, another member organization. “They’ll see that part of the country pulling together and lifting its head up, says, ‘We stood for something, and we continue to stand for something.'” To learn more about the One Nation Working Together rally, visit onenationworkingtogether.org. For more of Cynthia Gordy‘s Obama Watch stories, click here.