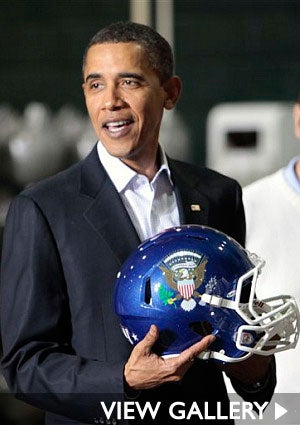 As we congregate to watch the New Orleans Saints play the Indianapolis Colts tonight, President Obama and his family will be hosting Democrat friends and Republican frenemies for an evening of football, reports CNN. About 40 people are expected to gather at the White House tonight. We can only imagine what they’ll feast on since the President and First Lady are self-proclaimed foodies. Last year’s guests (about 75) told CNN the president gave a room to room tour and served chicken sandwiches, hot dogs and chips and salsa. U.S. Representative (and Republican) Fred Upton described last year’s party as “pretty rowdy.” “It was like going to a neighbor’s and watching the game on a nice TV,” he told the South Bend Tribune. Read More: