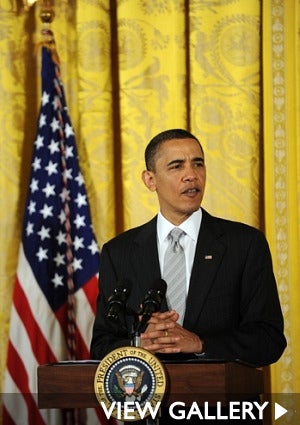 In an NBC interview last week, President Barack Obama stated that the First Family is no longer seeking a regular church to attend in Washington, D.C., because their presence would be too disruptive to services. Instead they prefer to worship privately in the chapel at their Camp David retreat, or visit different congregations on occasion. Or, as was the case on Tuesday, sometimes the President brings church to the White House. In a slightly tardy observation of the Easter holiday, President Obama invited about 80 Christian leaders to a prayer breakfast in the White House East Room. Guests were a mix of denominational leaders, including evangelical pastor and author Joel Osteen, Mexican American Catholic College president Dr. Arturo Chavez, and Bishop Vashti Murphy McKenzie, president of the African Methodist Episcopal Church. “We are awed by the grace He showed even to those who would have killed Him,” President Obama said in opening remarks about the inspiration he draws from his faith. “We are thankful for the sacrifice He gave for the sins of humanity. And we glory in the promise of redemption in the resurrection.” Just before the prayer breakfast, though, Obama met privately with a group of about 20 local and national African-American ministers. For 15 minutes in the Blue Room, they talked about challenges facing their communities across the country. One attendee, Dr. Julius Scruggs, president of the National Baptist Convention, USA Incorporated, chatted with me about the conversation. ESSENCE.com: What did you discuss with President Obama in the meeting? DR. SCRUGGS: It was not a formal meeting; it was a very informal setting. Prior to the start of the prayer breakfast, Black ministers were taken aside to have a moment of conversation with him, and some questions were asked. We didn’t get too far away from the other clergy and persons who were gathered there. We didn’t want anything to look suspicious. After about 15 minutes, we rejoined the whole body where the prayer breakfast was to be held. ESSENCE.com: What questions were asked specifically? DR. SCRUGGS: They asked questions about the healthcare reform program, summer jobs for youth, and the high unemployment rate among African-Americans. He said that the White House was working on those areas of concern, and that we would see positive things coming to fruition. In terms of minority youth being hired for the summer, allocations are being made for that. He also plans to look at other areas in the budget where he can help cities that have higher African-American unemployment than others. He did make that promise. ESSENCE.com: It sounds like you had an encouraging conversation, despite some grumbling that the President hasn’t done enough to address challenges in the Black community. DR. SCRUGGS: That did not come up. I think the President is aware of the needs of the African-American community, and he’s moving to help in every way that he possibly can. He’s saddled, as we all know, with so many different issues coming from all directions. Healthcare reform has been the main agenda for the last several months, and getting that passed will help Black Americans just as it will help the rest of America. For more Obama Watch stories, click here.  Read more:
Loading the player...

Get Nude: Underwear and Shapewear Brands Catering to Women o...

DeVon Franklin Is Joining 'Married At First Sight' As One Of...