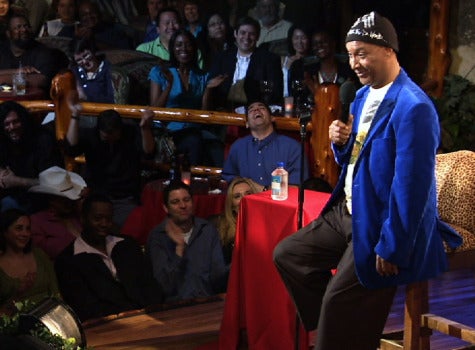 Paul Mooney is many things. He’s a writer, producer, truth-teller and based on the title of his latest stand-up special, he might possess some psychic ability as well. “It’s the End of the World,” Mooney’s hour-long Showtime special, is not for the faint of heart. Nobody is safe from his wrath, including our Commander-in-Chief, and lest we forget to mention that the show was taped at a gentleman’s club. You’ll have to tune in to witness the shenanigans for yourself. A living legend of the comedy game, Mooney–who has penned material for Richard Pryor, Eddie Murphy, Dave Chappelle, and even created the loveably cynical clown by the name of Homey–was gracious enough to take our call during his mid-morning brunch. Between dodging his verbal jabs, we got him to open up about the current state of the world, his musings about the Chrihanna debacle and why he just can’t get over Tiger. ESSENCE.com: Do you really think it’s the end of the world? PAUL MOONEY: Well, of course it is. We’ve got a Black President and you don’t think it’s the end of the world? ESSENCE.com: It feels like a new beginning, actually.
MOONEY: You must be crazy! Listen, we’ve got one little ol’ Black President and White folks are upset, but they’ve had 43. When we get to have 43, then you can talk to me. ESSENCE.com: Nobody talks about Oprah, yet you seem to have no qualms about it. MOONEY: Oprah is in the media. I’m a comedian and there are some people who are perfect targets, so I go after them, like Tiger Woods. He said he was Calabalasian, but he knows what he is now. He married Becky and she gave him a Becky ass-whooping. He’s out there hitting those White balls and Becky said, “Let me hit some Black ones.” She beat the Black out of that boy, that’s why he ran into that tree. The Asian part of him was driving. The only mistake that Tiger made with sleeping with those White women is that he left them alive. ESSENCE.com: That is just so wrong, but then again, you also have your own theory about Chris Brown and Rihanna.  How did you find humor in that situation? MOONEY: That island girl nearly beat that boy to death. Think about it, how many heavyweight champions do you see with bruises and the person they beat was knocked out? She almost killed that boy and now he’s got brain damage. Have you seen his new video? He thinks he’s a transformer. He’s lucky to be alive, though. You know she’s got that umbrella. ESSENCE.com: Let’s talk about you. Were you really invited to do “Dancing with the Stars?” MOONEY: I’m not dancing with no stars, I’d rather sleep with them. That would be a much better show, don’t you think? ESSENCE.com: Hmmmm, maybe! So, what do you want folks to walk away with after watching your special? MOONEY: I’m funny, bottom line, so I want them to walk away, laughing. Paul Mooney’s “It’s the End of the World” airs tonight at 11pm PT/ET on Showtime.