Wardell shrugs. He’s my best friend — okay, pretty much my only friend — and half the time I still don’t understand what goes on in that oversized melon he calls a head.

This is one of those times.

“I thought it’d be good for you,” he mumbles.

“Good for me?” I can hear my voice going higher and higher. I sound more like my mom’s ancient cat than a fourth-grade boy. I stab a finger at the piece of paper tacked onto Mrs. Crump’s bulletin board.

There’s my name under “Candidates for Hall Monitor.”

And right below the only other name on the list. The only name that’s ever been on this list, or any other list. Ever. In the entire history of Mrs. Crump’s fourth-grade class at Thurgood Cleavon Wilson Elementary.

“How,” I ask Wardell, trying to get each word out, “is competing with Tariq Thomas good for me?”

I slowly glance across the room. There he is. Tariq Thomas. Thurgood Cleavon Wilson Elementary’s TCW’s golden boy. Tall, charming, athletic. Tariq has it all.

Including his own personal pep squad and enforcer rolled into one. Keisha Owens.

The very same Keisha who is currently glaring at me from beneath the tower of curls that makes her almost as tall as her cousin.

“What were you thinking, Bakari Katari Johnson?” Keisha demands. Her voice carries across the room with the might of a lioness. Heads turn to look at me, then back at her, then at me again. It’s like a tennis match — and I’m the ball. “You go up against my cousin,” she continues, “you’re gonna get beat. You’re gonna get beat hard!”

“Everybody knows Tariq’s hall monitor,” she warns me. “He always been hall monitor, he will always be hall monitor. That’s how it rolls here at Thurgood Cleavon Wilson Elementary. You can’t get in the way of that. You do, you will get squashed.” She slaps both hands together, then dusts them off like she’s done with me. Only I know this is just the beginning.

“Well,” Mrs. Crump announces with a smile, “I think it’s nice that we have more than one candidate this time around.” She looks at me with pity. “Good for you, Bakari, for giving it a try.” Her eyes flicker to Tariq from behind her thick glasses, and I feel like she just added, “Not that it’ll do you any good.”

Which is about how I feel about it anyway. And why I’d never have signed myself up for hall monitor in the first place.

“What were you thinking, dude?” I ask him through clenched teeth as I steer us away from the bulletin board and back to our seats. It’s just about time to take roll. Mrs. Crump likes everyone in their seats neat and prompt. “You know Tariq’s gonna slay me.”

“Maybe,” Wardell agrees, squeezing his big bulk into his chair. I swear, his head would look enormous on anyone else, but on him it actually looks small, like a cherry on a chocolate ice cream sundae. “But you don’t know until you try.” He shrugs again. “Just might surprise yourself.”

That’s one of the things I like about Wardell. Usually. He’s always looking for the positives. “When life hands you lemons, make lemonade,” as my wise granddad used to say. And Wardell sure likes his lemonade.

Times like this, though, I don’t see exactly how lemonade’s gonna help me much. With two candidates for hall monitor, Mrs. Crump’s gonna let the class vote. She likes putting some things in the hands of the fourth-grade people in her class. And the people love Tariq.

Not that most of my classmates hate me. Least, not so far as I know. They just don’t think much about me at all. Most of them probably don’t even know my name.

Right now I have two votes: me and Wardell.

That’s a landslide for Tariq.

I reach into my pocket and find my granddad’s lucky marble. It’s a nice one, big as a quarter and pale gray, made of granite instead of glass. “That marble’s magic,” he’d say every time we played. “Pure magic. All you need in life, Bakari, is three things: light, courage, and power. You bring the courage and the will, this here marble will do the rest.” He always had it in his hand or in his pocket, always. One day a month back, after he’d gotten real sick, he handed it to me. “Hang on to this for me, Bakari,” he said. “And trust in the magic. Remember: light, courage, power.” He died just a couple days later. Rolling that marble back and forth between my fingers makes it feel like he’s still here with me. But I’m not sure even he could help me out of this mess.

“Johnson, Bakari Katari,” Mrs. Crump calls, and I raise my hand. At the same time, I hear Keisha say, “Who?” to Tariq, loud enough for most of the class to hear. A bunch of kids laugh. My stomach does a flip-flop. Great.

After attendance — and Tariq’s resounding, “Yes, ma’am!” at his name — we get out our math books. My stomach’s still banging around, and I feel like I might puke. The constant whispers and giggles between Keisha and Tariq — along with weird looks at me — aren’t helping.

Mrs. Crump’s okay — a little strict, but not mean — and I guess I look as bad as I feel because she takes one glance and nods. “Here, Bakari.” She hands me the bathroom pass. “Not too long, okay?”

I nod and light out of there, but not before Keisha whispers, “You can run, but you can’t hide, loser.”

Her laughter follows me out.

Out in the hall I feel a little better. Especially once I can’t hear Keisha laughing anymore. I know it’s just nerves messing with me. That doesn’t make them stop, though. I head to the bathroom. Maybe some cold water will do the trick.

I’m halfway there when a blast of cold air hits me across the face. It’s a warm early fall morning. Did somebody leave a freezer open somewhere?

Then a glowing, sharp blue disk appears out of thin air, floating about even with my head.

A pair of arms shoots out of it, pale blue and cold as ice — and grab my shoulders.

The arms give me a hard yank, and I’m off my feet — and falling headfirst through that disk.

This day’s just getting worse and worse!

The Zero Degree Zombie Zone is on-sale August 26, 2014. Share with your friends at #ZeroDegreeZombieZone! 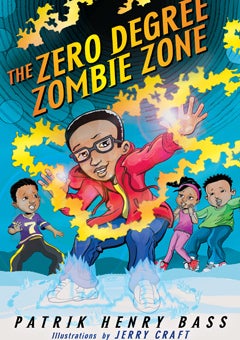