Skip to content
Scott Dudelson/Getty Images
By Demetria L. Lucas · Updated December 6, 2020
Offset, the estranged husband of Grammy-nominated rapper Cardi B, has been on an increasingly toxic and disturbing campaign to “win” back his wife. In the past week, it’s escalated from odd to inappropriate to habitually line-stepping on harassment. It started with a tweet a few days after Cardi announced she had parted ways with her “baby daddy,” as she calls her husband of one year. In a stunning lack of accountability, Offset tweeted, “F— y’all, I miss Cardi.” It was as if social media users were responsible for his wayward penis and his wife’s departure, not him. On Friday night, the kick-off to Offset’s 27th birthday weekend, he was at it again. At the Rolling Loud festival in Los Angeles, 21 Savage invited him onto the stage and led the crowd to chant, “Cardi, take Offset back!” as a beaming Offset stood silently by. I cringed. Separations and divorces, even breakups, are emotionally devastating, doubly so when there is a child or children involved. And here Savage and Offset treated this high stakes, emotionally fragile situation like it was a joke, as if the fate of his marriage should be determined by popular vote and public opinion. The same night, Offset uploaded a 50-second video to Instagram apologizing to his wife for “partaking in activity that I shouldn’t have been [par]taking in.” He claimed he didn’t cheat, only “entertained” things he shouldn’t have. (Translation: he tried to arrange a threesome that never came to fruition). He added that his birthday wish was to get his wife back and spend Christmas with their five-month-old daughter, Kulture. I was torn about this. Cardi announced their separation publicly (in reaction to her husband’s texts attempting to arrange a threesome hitting the Internet) and he publicly embarrassed his wife, so maybe a public apology was an appropriate act of contrition.  I didn’t like that his video prompted tens of thousands of people to encourage Cardi to reunite with her husband. A quick apology for his transgressions, and men were acting like Offset had raised Lazarus, healed a leper and walked on water. Women seemed equally impressed by his bare minimum behavior. I guess when so many men choose denial and deflection over accountability, a quick apology seems groundbreaking and solves everything. 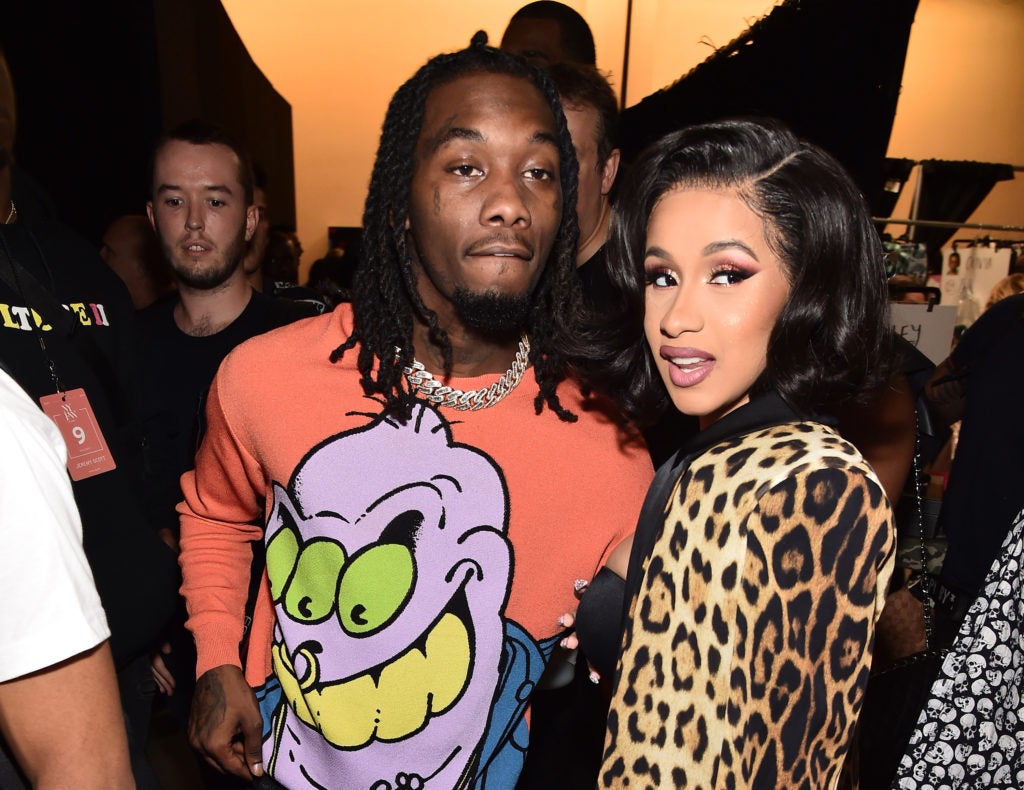 It was so strange to watch fans and followers place the onus on Cardi to and keep her family “intact.” He allegedly cheated, but she had to be what Nina Simone called “the Keeper of the Flame” and “save” her family? There are two adults in this marriage, but only the one who was wronged was burdened with the responsibility of its downfall or salvation? It seemed lost on so many people that there would be no family for both partners to “save” if Offset hadn’t been, well, off, “entertaining.” But did Offset know all that would be the outcome of his little video? Could he have reasonably predicted it? I questioned if he was being manipulative, but I wasn’t willing to flatly label his actions as such at the time. I am now. On Saturday night, Cardi B headlined the Rolling Loud festival. She is the first woman to ever do so. At some point during her performance, Offset “surprised” her by having a gigantic display that read “take me back, Cardi” rolled onto her stage. And then he appeared from backstage, bearing dozens of white roses. In close up videos of the scene, Cardi looks confused and mortified. Offset bizarrely says, “I’m sorry, Bruh,” by way of apology, and reminds her he will do whatever it takes to get her back. He seems to go in for a kiss, which is rejected and Cardi sends him on his way. Across the Internet, I’ve seen Offset’s interruption lauded as an act of love, a man doing what he has to do, and a man entitled to these shenanigans because Cardi is his wife. That says a lot about the dysfunctional way many people view love, women and marriage. Offset’s actions Saturday night were invasive and possessive, distracting and selfish. His disruption was not indicative of a changed man, only a grandstanding and attention seeking one. Cardi was at work, and here he comes literally interrupting her grinding, only focused on being heard and seen by the crowd, intentionally seeking the popular consensus to pressure his wife to take him back and with little regard for how his actions might make his wife feel or affect Cardi’s ability to do her job. That wasn’t an act of love; that was a gross display of ego. (There’s a difference.) Some might even call it bullying. I wish someone would tell Offset that there are more effective ways to get his wife back, that is, if she’s willing to return. Some women only leave when they are fed up, and there is no hope of reconciliation. Other women leave because they need a break from the BS and space to make a final decision. When in doubt, ask your partner and respect the answer. Whatever you do, don’t invade her space with a pop-up or public declarations. There are women who think that it’s cute, but you’re equally as likely to find women who think your so-called grand gestures belong on the long list of things that she’s asked for that you refuse to do, hence her departure. Invade her space repeatedly, and you may end up hastily served with a restraining order and/or divorce documents. Another revolutionary way to get your wife to return? Ask her what she needs to make things right and commit to doing that consistently. Demonstrate your commitment to your marriage with action, not just words. Pro tip: go to therapy and actually learn something about yourself while you’re there. And last but not least, don’t drive your wife off in the first place. Ease up before she rolls out. You don’t have to worry about getting your wife back if she’s never left. Demetria L. Lucas is the author of Don’t Waste Your Pretty. Follow her on Instagram at @demetriallucas.

This Much Talked About 'Love Is Blind' Couple Is Getting Div...

Conversations To Have With Your Kids As They Go Back To Scho...