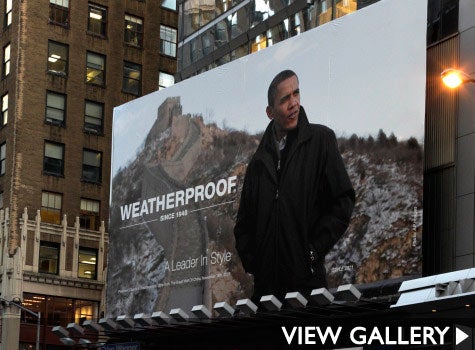 Yesterday we discussed how Michelle Obama does not wear fur, as her photo was posted in a PETA advertisement. Well, as the First Lady, she does not endorse advertisements either.

“The White House says the animal rights group People for the Ethical Treatment of Animals used the first lady’s image without her permission,” according the NY Daily News.

Apparently they ran with her image after her press secretary was quoted saying, “Mrs. Obama does not wear fur.”

Michelle Obama is not the only one in the White House whose image is being used without permission. A billboard in New York’s Times Square features a picture of President Obama at The Great Wall of China wearing a Weatherproof brand jacket. The tagline reads, “A Leader In Style.”

White House spokesperson Robert Gibbs told CNN, “It’s my understanding that the counsel’s office spoke with the company and that the company is supposed to take that ad down.”

Weatherproof had plans to leave that and another ad in New York’s midtown Manhattan neighborhood up for two months. Their spokesperson Allen Cohen said the billboards would be taken down quickly, CNN reported.

While PETA’s known for its “guerilla” advertisements, we’re not sure what Weatherproof’s excuse for using the President’s image–which was bought from the Associated Press–is for the ad.

“There is no First Amendment defense here,” intellectual property lawyer Barbara Solomon, told CNN. “This is not an issue of expression. This is a pure commercial appropriation. This is an advertisement and nothing but an ad.”

Media companies such as The New York Times, The New York Post and Women’s Wear Daily made the right move when they chose not to run the Weatherproof’s print versions of the ads.

It seems this mis-appropriation of images of public figures is more than likely to continue in this digital age. But thanks to how quickly news travels these days, it’s also more likely that they’ll be dealt with quickly.