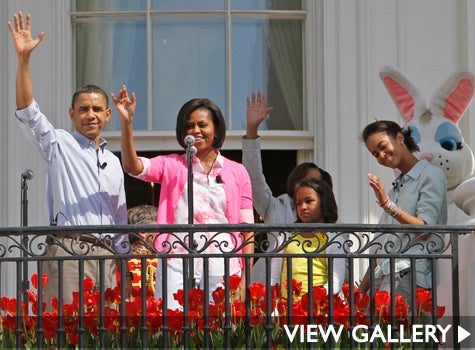 The South Lawn of the White House has been transformed into the nation’s ultimate playground today, for the annual White House Easter Egg Roll. Thousands of children and their families, from all 50 states, gathered there this morning–30,000 visitors are expected in total–to participate in the traditional Easter egg race, jam to a band of “Yo Gabba Gabba” creatures on the performance stage, and take photos in front of the White House with the Easter Bunny, the Cat in the Hat, and other kids’ characters milling about. In the spirit of First Lady Michelle Obama’s “Let’s Move!” initiative to end childhood obesity, the lawn is also set up with stations for a range of physical activities including football, basketball, tennis, dance, hula-hooping, and yoga. Pro athletes are on tap to man the sports zones. “Our hope today is that, in addition to having fun and doing some of the traditional activities like the egg roll and the Easter egg hunt, that you can learn about beginning to live a more healthy life,” Mrs. Obama said after she and the President welcomed guests from the White House balcony. Other “healthy” activities taking place are cooking demonstrations by celebrity chefs including Art Smith (Oprah’s former personal chef) and a farmer’s market. “And then if that’s not enough, you can go over to the music stage and just have some fun with Justin Bieber,” said Mrs. Obama, an announcement greeted with shrieking from most of the little girls in attendance. Other special guests are the cast of the television show Glee, who will perform, and author J.K. Rowling, actress Reese Witherspoon, and Maria from Sesame Street (the ’80s child in me is pretty excited about that last one), who will read stories. The Easter Egg Roll comes just after Easter Sunday, of course, which the Obama family spent at the Allen Chapel AME Church in Southeast Washington, DC. The African-American church is located in Ward 8, the District’s poorest, and a section in the city where four people were killed in a shooting last week. The First Family joined along as the congregation clapped, sang and danced during the spirited service. “Excuse me, First Family, but we like to get crazy up in here,” said one associate minister. “You might see shoes flying, hair flying. But we are praising the Lord.” For more Obama Watch with Cynthia Gordy click here.  Read More: