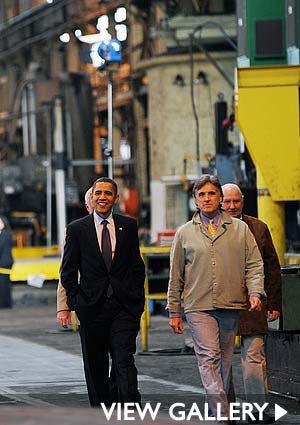 Many of the ideas suggested at yesterday’s White House Jobs Summit were familiar–creating more green energy programs, for example, and lowering the corporate tax. “Some of them I think we can translate immediately into administration plans and potentially legislation,” President Obama said optimistically in the closing session.

But a topic that was not delved into was Black unemployment. In a USA Today/Detroit Free Press interview, the President again rejected the idea of giving specific attention to the economic plight of minorities.

“I will tell you that I think the most important thing I can do for the African-American community is the same thing I can do for the American community, period, and that is get the economy going again and get people hiring again,” said the President. “I think it’s a mistake to start thinking in terms of particular ethnic segments of the United States rather than to think that we are all in this together and we are all going to get out of this together.”

The statements were in response to questions about the Congressional Black Caucus’ mounting criticism of the President. On Wednesday, in an attempt to put pressure on the White House to address the Black unemployment rate, 10 members of the group of African-American legislators boycotted a House committee vote on financial industry regulation (the bill still passed, but Representative Maxine Waters suggested that the CBC’s 42 members could thwart other Democratic bills if their concerns are ignored).

“There are those who choose not to speak about African-Americans or the working class,” Waters said on Wednesday. “We can no longer be in denial that certain sectors of our population, including the African-American community, are feeling the recession to a greater extent.”

Black unemployment is 15.7 percent, compared to 10 percent for the overall population. Bureau of Labor statistics show that higher education doesn’t close the gap, with college-educated Black men having nearly twice the rate of unemployment as their White counterparts. Do you agree with the President’s idea to focus on the nation as a united whole, instead of giving specific attention to the unique challenges facing minorities? And what do you make of the Congressional Black Caucus’ strategy of obstructing the President’s policies, through boycotting bill votes, in order to make their point?