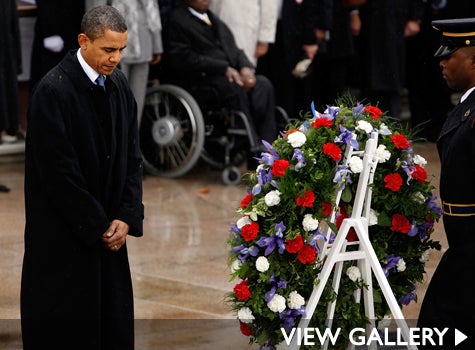 On this Veterans Day, the President and First Lady visited Arlington National Cemetery to honor the men and women who have served in America’s military. After participating in a wreath-laying ceremony at the Tomb of the Unknowns, President Obama delivered remarks.

“There are many honors and responsibilities that come with this job, but none is more profound than being Commander-in-Chief,” the President said, continuing that he is mindful of and grateful for the daily sacrifices made by the military.

“Just as the contributions that our servicemen and women make to this nation don’t end when they take off their uniform, neither do our obligations to them,” he said, admitting that as a nation we have not always honored our returning soldiers, particularly after the Vietnam War. “That’s something that will never happen again. To them and to all who have served, in every battle, in every war, we say that it’s never too late to say thank you.”

On the heels of his sober remarks, President Obama returns to the White House, where he will conduct a meeting in the Situation Room about the strategy in Afghanistan and Pakistan.

He’s been meeting frequently with his national security team on how to proceed in the region, where 55 Americans were killed in October, the war’s deadliest month to date. There are now four final options on the table, with top advisors banding together around a proposal to send 30,000 additional troops. White House officials, however, say that the President has not yet made up his mind.

While some have criticized the President for not reaching a quicker decision, particularly after U.S. Commander in Afghanistan General Stanley McChrystal requested 40,000 more troops six weeks ago, the White House says he is intent on making a well-thought out decision rather than a rash one.

It’s a decision that surely weighed on the President when, a couple of weeks ago, he stood out all night at Dover Air Force Base as fallen soldiers from Afghanistan were lifted off a cargo plane one by one. Saluting each casket as it was carried out, the President watched firsthand the human cost of the war that he is taking into account from all possible angles.

What do you think the United States should do next in Afghanistan? Do you think President Obama is taking too long to make a final decision?

To learn more about what the President is up to read Cynthia Gordy’s blog Obama Watch.