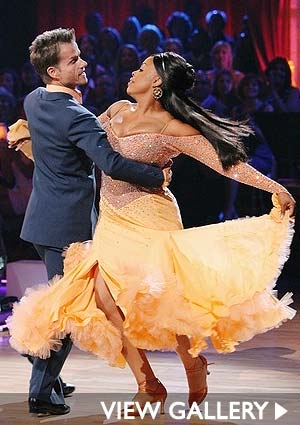 The moment we’d all been dreading came last Tuesday night when Niecy and Louis were handed their walking papers. Even though we’re still reeling from their departure, we shouldn’t be surprised that the woman who happily embraced her “jiggly parts” every time she stepped onto the dance floor would take the news like the champ that she is. After the pair spent the remainder of last week on a bi-coastal media blitz, we tracked Niecy down on Friday to offer our condolences and gauge her feelings about leaving the show. Ever the optimist, she’s looking forward to giving her hurting feet a rest (and a pedicure!), staying in touch with Louis and shaking her groove thing one more time during the “Dancing with the Stars” finale episode. “Honestly, I wasn’t devastated when our names were called last week, but I was disappointed. I’d really been looking forward to doing my Samba to ‘Bootylicious’ and thankfully, the producers said that I could do my thing on the finale next week. That’s when I knew that everything was going to be just fine!   “I’ve barely had a chance to sleep since we were eliminated. Immediately after Tuesday’s show, Louis and I appeared on ‘Jimmy Kimmel Live,’ then I went home to pack my bags. The next morning I taped ‘Good Morning America’ at 5am, raced to the airport and was off to the east coast to do a New York press tour.” “My ‘Dancing with the Stars’ experience has taught me a lot. I now know that it’s never too late to pursue your dreams. I also learned that when faced with the hardest of circumstances, I might bend, but I won’t break. The last thing I learned is that good Black men still exist, because mine held me down for this entire process — he didn’t miss a single performance or results show and he made sure to be there to rub my feet and have champagne waiting for me in my trailer when I came off of the dance floor! And unlike Louis, he knows better than to touch my weave! [laughs] “Since I mentioned my feet, what I won’t miss about being on the show is the pain. When you’re competing, they ask that you not get the bottom of your feet [scrubbed] because you need that roughness. I can’t wait to get a pedicure because my feet look like I’ve been walking on hot bricks! I look at them like, “Really, Niecy… really?!” [laughs] “I believe that I’ll be wearing purple for the finale dance, but no matter what color my dress is, I’m going to beg them to add feathers or beads or something to it because I’ll be shaking it up, okay? And just because I’m dancing to ‘Bootylicious,’ I don’t plan to have an alter-ego, like Sasha Fierce. I don’t know how Beyonc does it because I’m having enough trouble just trying to be Niecy Nash!” [laughs] “My ‘Mr. Wonderful’ just told me that he’s found my eighth grade dance teacher, Ms. Vivian Gandy. I’d love to invite her to the finale show, but I can’t even front — she doesn’t owe me an apology for kicking me out of dance. I should have gotten kicked out, but I just should’ve come back. That was on me.” “Louis has said that Kelly Osbourne and I have been his favorite partners so far. I think that he’s gong to be in my life forever. Maybe he’ll be the man of honor at my wedding! I’ll miss dancing with him every week and I’ll also miss seeing my fellow contestants. I really developed great relationships with Erin Andrews and Evan Lysacek. “Overall, I so enjoyed being on ‘Dancing with the Stars,’ but there’s no way I can complete my diary without saying ‘thank you.’ I want to thank you all for your love, support and for your votes. I really do appreciate it!”