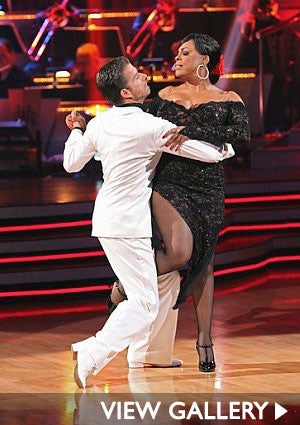 Week Seven of competition kicks off tonight and Niecy Nash can hardly believe it. Actually, what she can’t believe is that she’s been sporting such an unfashionable accessory — a knee brace! Last week was a doozy for Niecy. Again, she clocked in at “Clean House” and “The Insider” and learned two dances for her performance on “Dancing with the Stars,” but sadly, she injured her knee in the process. Oh, and did we mention that Louis is suffering from a possible bout of food-poisoning? But, as they say in Hollywood, the show must go on… Niecy called-in yesterday as she was making her way to a late afternoon rehearsal, and as usual, she was in good spirits. Clearly, it takes more than the rigor of three jobs and a hurt knee to put a damper on her dancing spirit. “Yes, I’ve hurt my knee and yes, I’m medicated, but the show must go on. I just got a call from Louis, who is extremely ill, so I’m not sure if he’ll be able to dance with me on the show. All hell is breaking loose, but who knows, maybe this will be my best performance yet! [laughs] “The Quick Step is my primary dance, and let me just say that it’s quick, okay? It’s the fastest of all of the ballroom dances, so keeping up is one thing. Trying to keep up with an injury is a whole ‘nother situation. I have my knee brace on now and since I’ll be wearing a long dress for my performance, I’m trying to decide if I’ll wear the brace when I dance. Either way, I’m going to be a snow princess. I’m wearing all-white. “For the Cha Cha challenge, Erin Andrews, Evan Lysacek and I will be dancing against Nicole Scherzinger, Chad Ochocinco and Pamela Anderson. As far as the theme goes, we had to choose between Lady GaGa’s ‘Telephone’ and Madonna’s ‘Holiday.’ Our team chose ‘Holiday,’ so we’ll be giving you vintage Madonna — get into that! “Last week, I tried to do everything the judges told me to do. We did get out of the ‘6’s,’ but I’d hoped that we’d earn higher scores, especially because we landed in the ‘bottom two.’ The Swing marathon was a lot of fun, though. I didn’t think I’d be able to learn another dance, so I went out there thinking, ‘I’m just going to jump around and make funny faces.’ “If I said that I’m feeling overwhelmed, that would be an understatement. This is the hardest undertaking I’ve ever experienced. It might be easier if I wasn’t also raising children, getting up at 4am to work on ‘The Insider’ and helping people with their filth and clutter on ‘Clean House,’ but all of it, at once? Please! ‘Dancing with the Stars’ is a full-time job in itself! “I know that I might seem like I have it all pulled together, but that’s only because nobody gets to see my midnight meltdowns. [laughs] Some days, I’m like, ‘I caaaaaaan’t do it,’ but what’s been keeping me going is laughter, spending time with my boyfriend and anything chocolate! “You know what? I’m really starting to see that Mirror Ball in my future. Why not? Somebody’s got to win it and it might as well be me.” “Dancing with the Stars” airs tonight at 8pm, EDT, on ABC. To vote for Niecy and Louis, call (800) 868-3405.