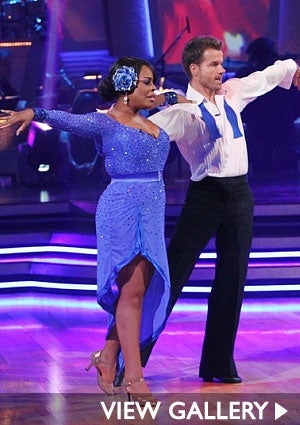 It’s getting kinda hectic. After a week spent rehearsing and traveling and shooting episodes of “Clean House” in Chicago, Niecy stepped to the “Dancing with the Stars” stage last Monday and received a not-so-warm response from the judges. We all cringed and winced as she and Louis were granted a mere 36 points (out of 60) for their spirited Rumba, which she dedicated to her late brother. They looked a tad disappointed by the scores, but even as they escaped elimination by a hair, the dancing duo still held their heads high. For this, the fifth week of competition, Niecy and Louis will kick things up a notch–literally!–with the Jive. She rang us up between rehearsals and costume fittings to give us the low-down. “When I tell you that I’m so tired that I can barely remember anything that happened last week, I’m not kidding. I will say that it was a rough one! “As opposed to being sexy, my Rumba had more of a spiritual twist to it and I was just happy that my emotions didn’t get the best of me. I was able to complete the routine, so that was my personal victory, but the judges were tough–on everybody.   “Tonight, Louis and I are doing the Jive and as much as I thought I’d be happy to finally be doing a fast dance, this one is giving me a run for my money. The Jive is the fastest dance of them all. It’s so fast that it’s ridiculous! [laughs] “This week is all about movie themes and our theme for the Jive is “La Bamba,” which should be fun. I’ll be wearing a multi-colored dress–it’s yellow, orange and red at the bottom and there’s lots of fringe. Did I mention that it’s short, too?! “We’re at the half-way point now and I’m going to try my best to take into consideration all that the judges have said to me up until now. I have to be honest and admit that I’m not the most competitive type, though. I don’t look at things like, ‘Oh, I need to be this person or that person.’ I just really want to dance my best. I want to stay in my lane and enjoy my performance. “Along with having my kids in the audience to cheer me on, what I’m really looking forward to tonight is looking out into the crowd and seeing my grandmother, aunts and cousins, who have all flown in from St. Louis to attend the show. The circus is in town, for sure!  [laughs] “Dancing with the Stars” airs tonight at 8pm, EST, on ABC. To vote for Niecy and Louis, call (800) 868-3405. Related stories: