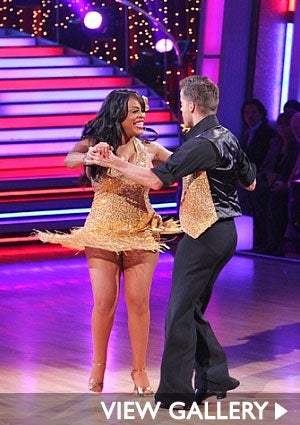 “Mission, accomplished!
“I think I did a fantastic job last week with the Cha Cha Cha. Louis and I even got the first standing ovation of the night. My primary goal was to not forget the routine and I didn’t. I also didn’t embarrass anybody that I love, so I was happy–exhausted, yes, but happy! “Louis and I are doing the Fox Trot tonight, which I learned during rehearsals, wasn’t as easy as I thought it would be. At first, I thought, ‘OK, let’s get foxy!,’ but I soon found out that it’s not about dropping it like it’s hot and picking it back up! It’s none of that, trust me. “The person who you saw dancing last week was the girl who got kicked out of her eighth grade dance class, but tonight you’re going to see a slight departure from the woman you know as Niecy Nash. The Fox Trot is a very Fred Astaire and Ginger Rogers–type of dance, so I’ve been calling my partner Louis Astaire and me? I’ve renamed myself Ginger Snap–that’s a cross between Ginger Rogers and a spicy cookie! That’s exactly the energy I want to bring to the stage. “Tonight, I’ll be wearing a flowing, pink gown, complete with feathers. It’s going to be a situation, OK? I don’t really have a pre-dance ritual, but I doubt that I’ll have the delicious audacity to eat a cheeseburger like I did last week. But when they say, ‘That’s it, time to go home,’ I’m going to want some short ribs and some mashed potatoes! Except for me, everybody in the competition can hula hoop inside of a Cheerio. I’m not sure what they’ve been eating, but I’m a real girl and I like to get my eat on. “As far as my predictions for the first round of eliminations tomorrow night, all I’ll say is that I know who I think should stay—me!” Round two of this season’s “Dancing with the Stars” airs tonight at 8pm, ET. Read more: Niecy Nash’s ‘Dancing with the Stars’ Diary, Week 1 Niecy Nash Says She Wants To Keep Her Curves