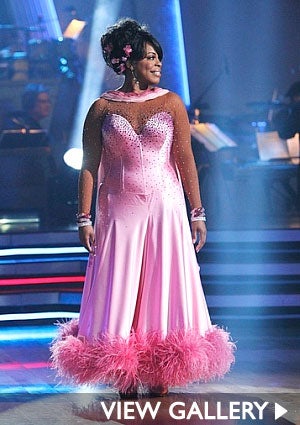 “If I looked nervous during last Tuesday’s elimination, it’s because I realized that at any point, anything can happen. Sure, Louis and I earned 39 points from the judges, but that’s just part of it. The other part is about fans’ votes, which is really what keeps you in the competition. I can’t say that I was surprised that Shannen Doherty was the first to be eliminated, but I was surprised that Pamela Anderson found herself in the bottom two. Buzz Aldrin got all ‘4’s’ from the judges, but he stayed because the people who love him, voted. “Tonight, Louis and I are dancing the Waltz and our song is ‘With You I’m Born Again.’ We were also assigned to tell a story with our dance, so we decided that we’d tell an interracial love story that’s set during the 60s. That’s our goal. “What I’ve learned about the Waltz is that it’s very similar to the Fox Trot. During rehearsals, I kept reverting back to our previous dance and Louis would say, ‘No, no, no…’ I’ve encouraged him to speak in ways I can understand because whenever he’s says technical terms like pas de bouree, battement or passe‘, it’s like, ‘Uh, what? What happened?’ [laughs] “Lately, he’s been using food vernacular to communicate with me, which I understand a lot better. He might tell me that I need to be ‘as smooth as butter’ on a certain part of a dance or that a certain movement is ‘as tender as a piece of filet mignon.’ Sometimes, he’ll tell me that I need to add a little more seasoning to a movement, too. Speaking of food, what I now know for sure is that I can’t eat a cheeseburger before I dance. Otherwise, I’ll just have to go lay down in a corner somewhere! “Believe it or not, there’s a lot of passion that goes into the Waltz. One of the things that the judges told me last week was that I needed to be ‘bigger,’ so I’m looking forward to SUPER-SIZING myself! This is the first dance where I’ve added a little bit of myself, so I’ve gone from student-to-choreographer. “There’s no rest for the untrained, so I rehearsed all week and this past weekend–yes, even on Easter Sunday! I’m still enjoying the journey, though. Not only do I get to live my dream of being a dancer, but I get to play dress-up every week and create a new gown. So far, Louis has created everything you’ve seen me wear and tonight, I’m wearing a lemon-colored, chiffon gown. I feel like a little, lemony tart in it–I just love it! “I know that a lot of people think that because they love you, other people do, too, and are voting you through, so they don’t vote. I just want to make sure that my fans are indeed voting! Thanks ya’ll!” “Dancing with the Stars” airs tonight at 8pm, ET, on ABC. To vote for Niecy and Louis, call (800) 868-3405. Read more: