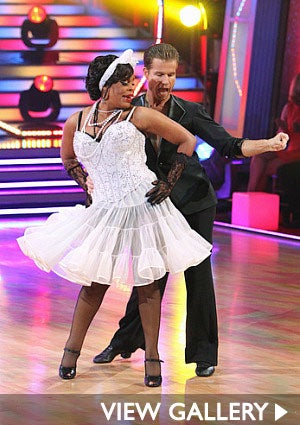 “Can you believe it?” That was Niecy Nash’s response when we congratulated her on making it to the “Final Five.” To answer her question, “Yes, we can!” How serendipitous that the girl who was once yanked from her eighth grade dance recital would grow up to become the woman who shimmied her way to Week 8 (and hopefully, beyond!) on “Dancing with the Stars?” Very! That brand of sweet revenge is probably why she had no qualms about embarking on yet another weekend spent at the rehearsal studio. She even passed on Mother’s Day brunch! Niecy checked in with us on Friday afternoon just after getting her costumes squared away for tonight’s performances of the Viennese Waltz and a ’90s-infused Paso Doble. For the record, her knee is on the mend, Louis is back to his old self and together, they’ll be ready to dance the night away as they inch closer to that fabulous, shiny Mirror Ball! “We made it! Louis and I are in the ‘Final Five!’ “If you ask me, I think we killed it last week. My knee is not quite back to 100 percent, but it’s definitely feeling better. I didn’t even have to wear the brace under my gown as I thought I might have to. I was also really happy that Louis was feeling better. Although another dancer volunteered to fill in for him, I was thrilled to have him dance with me. I loved our Quick Step and dancing to Madonna’s “Holiday” was a lot of fun. We had a really good time out there, but the absolute best part of the night was when we scored our first “9!” I was so happy that I almost cried. “We’re doing two dances on Monday night and unlike the past two weeks, we won’t be doing a group dance. Both dances will just be Louis and I — alone. The first is the Viennese Waltz and I’ll be wearing a print, Versace dress. For our second dance, a ’90s-themed Paso Doble, I’ll be dipped in peach crystals and I can’t wait! “I’d be lying if I didn’t admit that the mood has changed on the show. With so few of us left and each of us having to learn two dances, the energy is very intense. OK, none of that rally matters to me, though, because for starters, I’m thrilled to be the only Mom who has made it this far in the competition. I know that each week, Louis and I are getting closer to claiming that Mirror Ball. I’ve already got a place picked out for it. I’m going to sit it right in the doorway of my house so that everybody will have to step over it. I want the world to know that I’m a dancer, baby!” “Dancing with the Stars” airs tonight at 8pm, EDT, on ABC. To vote for Niecy and Louis, call (800) 868-3405.