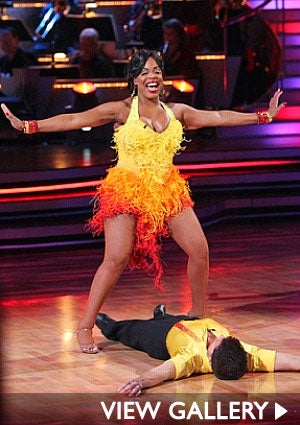 Imagine working three jobs–in two different states–meanwhile trying to learn two new dances and fitting for two costume changes for your sixth week on a highly rated, nationally televised dance competition. Well, that’s how Niecy Nash’s life is adding up at the moment and although she could use a nap, she’s loving every minute of it. Tonight, Niecy and Louis take on the Argentine Tango and the Swing, but first, we tracked her down just as she was pulling up to the dance studio for a Sunday afternoon rehearsal. Thankfully, she’d already stopped by Starbucks to pick up her chai soy latte–with a shot of espresso, of course! “First, let me say that I am good and hot-buttered tired, OK? [laughs] I wish I could be in my bed right now, but instead, I’m at rehearsal. Honestly, I have no idea how I’m still holding up, but I’m thinking that it might be the combination of prayer and caffeine!   “This week, everybody is doing two dances and Louis and I are dancing the Argentine Tango and the Swing. All of us are doing the Swing, together, and each couple will be voted off of the dance floor, one-by-one. The score that we each earn from the Swing will be added to the score for our second dance. I’m really looking forward to impressing the judges with my technique. For some reason, Louis and I can’t seem to get out of the ‘6’s,’ even though I’ve been shaking everything my momma gave me! I did have a really good time last week and so did my family, but waiting for my name to be called on Tuesday night gave me knots in my stomach. “Since we’re on the subject of last week, can I just tell you how crazy my schedule was? On Wednesday, I headed out to Chicago to tape more episodes of “Clean House.” I landed at 5am and headed straight to work and once we wrapped at 5pm, Louis and I were sweating it out in the dance studio. When I got back to LA, I had to start taping my segments for “The Insider” and keep up with rehearsals. I’ve been working every job that I have! “As far as last week’s eliminations, all I will say is that I felt really badly for Kate. I know that it didn’t translate well on television, but after speaking with her, personally, I know that she definitely wanted to continue on the show. I’ve been trying to get out of the house and I’ve only got three kids at home. She’s got eight! If I were her, I would have shown up, skipping! [laughs] “Now that we’re at the halfway mark, I’m very proud of myself. By now, everybody knows that I’m not a trained dancer, so I think I’m doing just fine to have survived this long in the competition. I’m looking forward to our two dances and just so you know, I’ll be wearing two costumes. They’re both black, but beware – I’ll be showing as much leg as the law will allow!”   “Dancing with the Stars” airs tonight at 8pm, EST, on ABC. To vote for Niecy and Louis, call (800) 868-3405. Related stories: