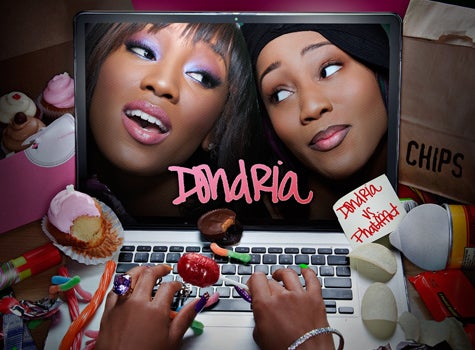 With the release of “Dondria vs. Phatfffat,” Dondria Fields joins an intriguing list of artists who have adopted a second persona. Though we’ve seen it in more high profile artists like T.I., Beyonce, and Janet Jackson, very seldom do new artists come straight out the gate comfortable enough to give their audience that type of insight — but So So Def recording artist Dondria has. Her long-awaited debut album, “Dondria vs. Phatfffat,” released today, is the product of opportunity, favor and hard work. The viral superstar, signed by Jermaine Dupri after becoming a YouTube sensation, used this album to prove she’s more than just a girl who lucked out with a computer cam and a mic. “[The album] explains the difference between the silly girl the world met on the computer and the artist who is now showing she can do more than sing in front of a webcam.” she says. For a debut, ‘Dondria vs. Phatfffat’ does prove her talent, and the album is filled with relatively age-appropriate songs that showcase her ability to rely on her own vocals, not auto-tune. The catchphrase “real R&B” is tossed around so loosely nowadays that the definition of ‘real’ barely carries any weight. Dondria, 24, is able to deliver R&B reminiscent of the ’90s better than some of her more seasoned peers. Some credit has to be given to producer/label executive JD, who wrote 95 percent of the album, including the hit single, “You’re the One,” the one track musically, vocally and lyrically that outshines many of the other tracks on the album. There are a few songs that come in a close second; “Where Did We Go Wrong,” a catchy tune that could easily pass for a Destiny’s Child track, attempts to figure out what causes a good relationship to make a wrong turn. The head-bopper, “No More,” uses a sample from rapper 50 Cent “21 Questions,” and describes what happens when a woman has had enough. The closing ballad, “Kissed by the Sun,” is a beautiful reflection on her journey in career and love, showcasing Dondria’s crisp and refreshing vocals. Musically, Dondria brings the R&B sound that this trendy “urban-pop” genre is missing, but the album lacks progression on the production side. The beats on songs like, “Believer” and “Still Be With Me,” fall flat and reduce her number of chances at another huge hit. Lyrically, there are few misses on the album, one of which is the sex-driven “Making Love.” When dealing with the obviously sensual, the fresh-faced singer lacks the emotional depth required to make the song believable. “Dondria vs. Phatfffat” is more than enough evidence this Texas girl won’t be a one-album wonder. Both Dondria and Phatfffat have the vocal chops to go the extra mile, and once polished this diamond in the rough will sparkle.