Kiara Muhammad is your typical 13-year-old girl. She loves playing tennis and hanging out with her friends. She recently graduated the 8th grade and would freak out if she got the chance to meet Jaden Smith or Taylor Lautner.

There’s just one small detail separating her from her peers: She’s the voice of the lead character on Disney Jr.’s Doc McStuffins, a show about a young African-American girl who wants to become a doctor. She spends her time healing her stuffed animals and teaching them healthy habits. The show has been a success, with a viewership of close to 918,000 children, ages 2 to 5.

Kiara recently spoke with ESSENCE about voicing an animated character, why she thinks the show is a success and about the overwhelming support that Doc McStuffins has received from both children and adults alike.

ESSENCE: Are there any similarities between you and Doc McStuffins?
Kiara Muhammad: I think we both strive for what we want. I really want to be an actress, so I took acting classes and I study my script before I go into the audition. In every episode, she always strives to help the toy and she always gets it done.

ESSENCE: You’ve also done some acting and commercials. Are you ever recognized in public?
Kiara: Yeah, it’s weird because it has happened at school. They know me, but then, they’ll be like, “Were you on a commercial?” Once a guy at school asked for an autograph. 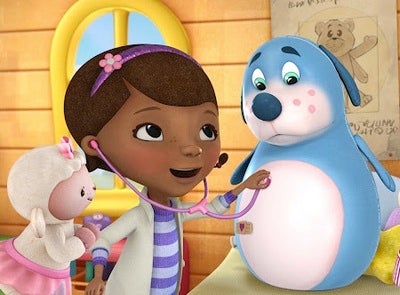 ESSENCE: So what do your friends think of you being Doc McStuffins?
Kiara: They think it’s really cute because they always make me do the voice, and they’re like, “Awww, I watched the show this morning before coming to school!” They just think it’s a cute show, and they’re happy for me.

ESSENCE: The show is a huge success among children. What’s it like being an idol for that age group?
Kiara: I just think it’s really great that they look up to Doc. The thing that’s special about the show is that it has those healthy messages, like, ”Don’t stay in the sun too long; you’ll get dehydrated.” “Always drink water and wash your hands so you don’t spread germs.” So I think that’s really why it’s getting this extra attention, because it has that healthy message, but it’s also a fun show to watch.

ESSENCE: The show has also gotten a big response from African-American doctors. What do you think of that?
Kiara: I think that’s awesome because they all were once little African-American girls who wanted to be doctors. These doctors are starting this kind of movement that are saying, “We are Doc McStuffins. Thank you so much for doing the show because we were in that place not so long ago.” And now, there’s a show that a lot of girls can look up to. They can do that.

Doc McStuffins, which airs weekdays on Disney Jr., has been renewed for a second season.

Rich, Famous and Frugal: Here Are Some Of Hollywood's Most M...

Nonkululeko Nyembezi Is The First Black Woman Named As Chair...

Lori Harvey Shares Her Relationship Red Flags And How Almost...