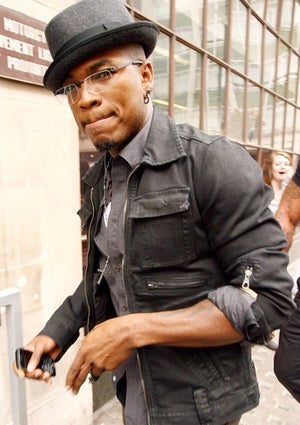 Ne-Yo took a week off of his weekly dialogue with ESSENCE.com to head overseas and perform the new tracks off the upcoming album “Libra Scale,” which was written like a screenplay of a sci-fi film. This week, Ne-Yo describes what’s next for the characters after “Beautiful Monster” and Champagne Life.” ESSENCE.com: Ne-Yo we missed you last week. Heard you were overseas doing your thing. What goes on? NE-YO: My apologies for my absence. I’m doing a couple shows and some promo. The new stuff is getting great response overseas. Number 1 in the UK!! ESSENCE.com: We also hear you shot the video for “One in a Million.” Can you tell us about it? NE-YO: Part three of the “Libra Scale” story is “One in a Million.” This episode introduces us to the ever-so-simple, cute, ever-so-sarcastic Pretti Sinclair. This is where Jerome meets Pretti for the first time and let’s just say her welcome for him is anything but warm. ESSENCE.com: Any updates on Jerome, Clyde and Leroy? More importantly, between Jerome and Pretti Sinclair. What gives? NE-YO: At this point in the story, Clyde, Jerome and Leroy are still in the essence of the “Champagne Life” when Jerome meets his potential love interest/arch nemesis, Ms. “One in a Million” herself, Pretti Sinclair. ESSENCE.com: The videos are very stylized and visual. What is your visual inspiration for “Libra Scale?” NE-YO: “Libra Scale’s” visual inspiration comes from my love of dark movies like “The Matrix” or “The Dark Knight” but also from my love of romantic comedies. This element is showcased more in part 3: “One in a Million” ESSENCE.com: What is your favorite film? And why? NE-YO: I have a few favorite films, so choosing just one is difficult. Some that come to mind in reference to “Libra Scale” are as mentioned earlier; “The Matrix” for its intelligence on top of its action, but also the romantic drama “Closer” for its creative yet realistic take on the black, white and gray of relationships. ESSENCE.com: You were sippin’ on Ace in the “Champagne Life” video. What’s your favorite champagne? NE-YO: Ace is definitely a favorite champagne of mine. I especially love Ace rose.