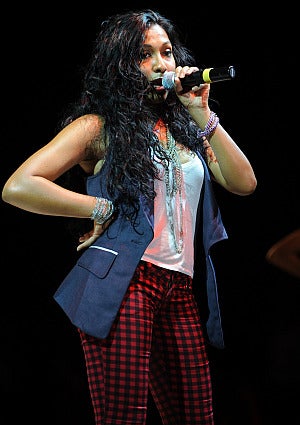 Universal Motown recording artists Melanie Fiona and Kem are just two of the acts pegged to perform during the 2009 United Way Thanksgiving Day Halftime Show: A Motown 50th Anniversary Tribute. The show, which will be held during the first of three NFL games held this Thanksgiving, will also feature Shontelle, Forever The Sickest Kids, Vita Chambers and Hal Linton.

Each act will perform classic Motown songs like The Jackson 5’s “I’ll Be There” and Stevie Wonder’s “Higher Ground” live at Detroit’s Ford Field during halftime of the Detroit Lions/Green Bay Packers game. Following the halftime performance, fans can visit nfl.com/thanksgiving to find out how to download a copy of the halftime medley, as well as music from each of the artists. Proceeds will benefit United Way. Five of the acts–Melanie Fiona, Kem, Hal Linton, Shontelle and Vita Chambers–will also join United Way the week of their performance to volunteer at the Detroit Boys and Girls Club’s “I Am Thankful” Dinner next Tuesday, November 24. This is the 11th year that United Way has worked with the NFL on the Thanksgiving Halftime Show to inspire NFL fans across the country to get involved in their communities.