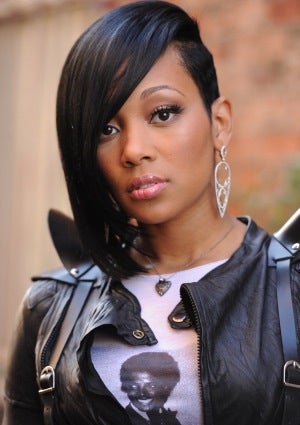 Don’t get it twisted, Monica continues to make it resonantly clear that she is not the young woman she used to be. However, after the countless headlines, rumors, breakups, and even her own reality show, whether you believe it or not is entirely up to you. We first heard fifteen-year-old Monica Arnold when she took the R&B scene by storm back in 1995 with her sassy triple platinum debut album, “Miss Thang.” Fifteen years later, and after a four-year-hiatus from the scene, Monica returns with her sixth studio album, “Still Standing,” on sale today. With the release of this album, Monica wants us know that while she’s been through numerous ups and downs in her career and personal life, she isn’t quite ready to fade into obscurity.  Ms. Don’t-Take-It-Personal is attempting to bust out some hits in a time when modern R&B, much like hip-hop, is losing its female voice to a more pop sound. On “Still Standing,” Monica directly and indirectly addresses her various struggles and survivals, including rumors dating as far back as “The Boy is Mine,” her hit duet with fellow ’90s breakout Brandy. In the end, however, Monica seems to have trouble translating these survival stories into what should have been a classic album. Even with today’s most coveted R&B producers and songwriters in her corner, including Ne-Yo, Bryan Michael-Cox, and Johnta Austin, “Still Standing” is ironically unbalanced. ESSENCE.com breaks down the album, track by track, and how “shaky” the tunes really are. Sometimes, We Fall Down The hardest part of sitting through the album is how much of it sounds stuck in a time warp. The ’90s R&B sound permeates most of the album, which comes off as Monica’s inability to innovate or find modern relevancy. Tracks like “One In Lifetime,” pledging the idea of one true soul mate, and “Love All Over Me,” about the surprising warmth of new love, can be yawn-inducing. And while we applaud Monica lyrically for her anthem, “Believing In Me,” and the apathetically written “Stay or Go,” both songs seem to fall flat. Wobbly Balancing Act There are times throughout “Still Standing” when Monica is vocally outstanding, but then the production doesn’t wow or entice. Then there is the track, “If You Were My Man,” that allows Missy Elliott to step it up on the production side, however the lyrics (Monica is rapping here) don’t authenticate the feeling that the music is trying to convey.  The same goes for “Here I Am,” a sexually-charged song about creeping while in a relationship with an inattentive man she won’t leave. Other tracks that aren’t exactly hits or misses include “Superman,” and Monica’s possible crossover tune, “Mirror,” which discusses how self-love is the most important love. With more of a pop sound, Monica describes how she is finally happy to look in the mirror and see her true self. Yes, Still Standing Besides the title track, the album’s lead single, “Everything to Me,” is really the only song we’re excited about. Utilizing a sample of Deniece Williams’ “Silly,” the song expresses what it feels like to be so in love with someone, nothing else seems to matter. And if we’re being completely honest, neither do any of the other tracks on this album. If “Still Standing” had ten more tracks on this level, perhaps the album would have been the classic we were anticipating. Read more: